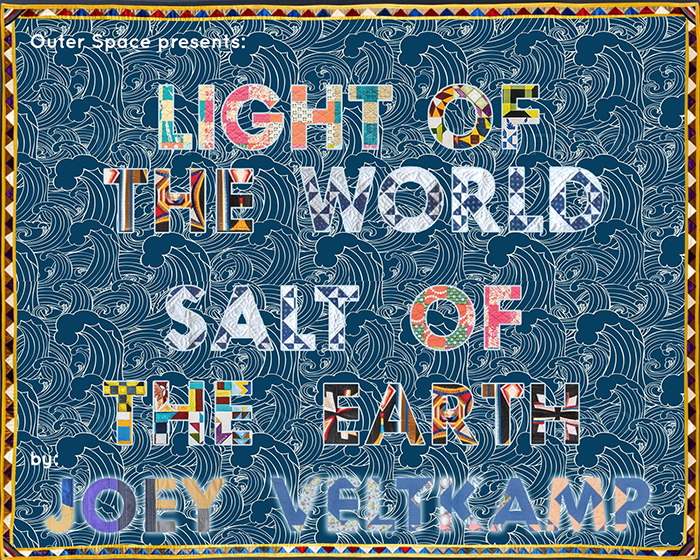 Outer Space presents:
Light of the World
Salt of the Earth
by Joey Veltkamp

“We live in an interesting time where the seat of moral authority is slowly shifting away from organized religion and towards the unchurched. These oversized flags include lyrics from the Stephen Schwartz musical Godspell which tells the gospel of Mark. They are messages I’m downcasting to my teenaged gay self, loudly singing and dancing when no one was home and thinking about how awful I was for liking boys. They’re a reminder to myself both then and now that “You gotta stay bright to be the light of the world!”
–Joey Veltkamp 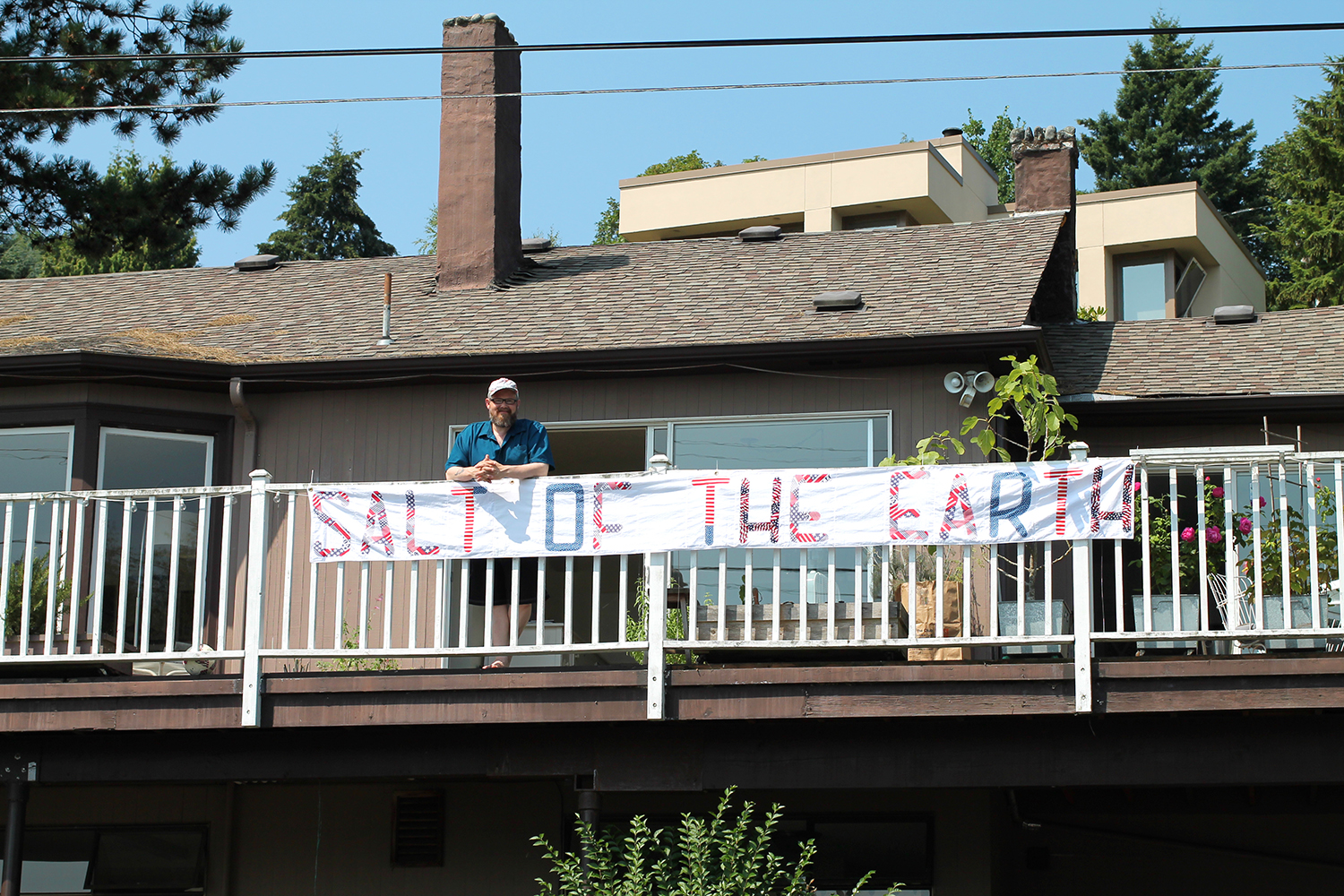 OS: You mentioned in your statement that the line is from 1970 musical Godspell, could you talk for a second about what that line and that musical mean to you?

JV: While I’m not really religious any more, I actually grew up going to church and have an incredibly soft spot for Jesus-y musicals (like Godspell and especially Jesus Christ Superstar). These two banners take their words from the Godspell song Light of the World (which borrowed them from the Bible) and symbolize the struggle I had growing up gay in the church. 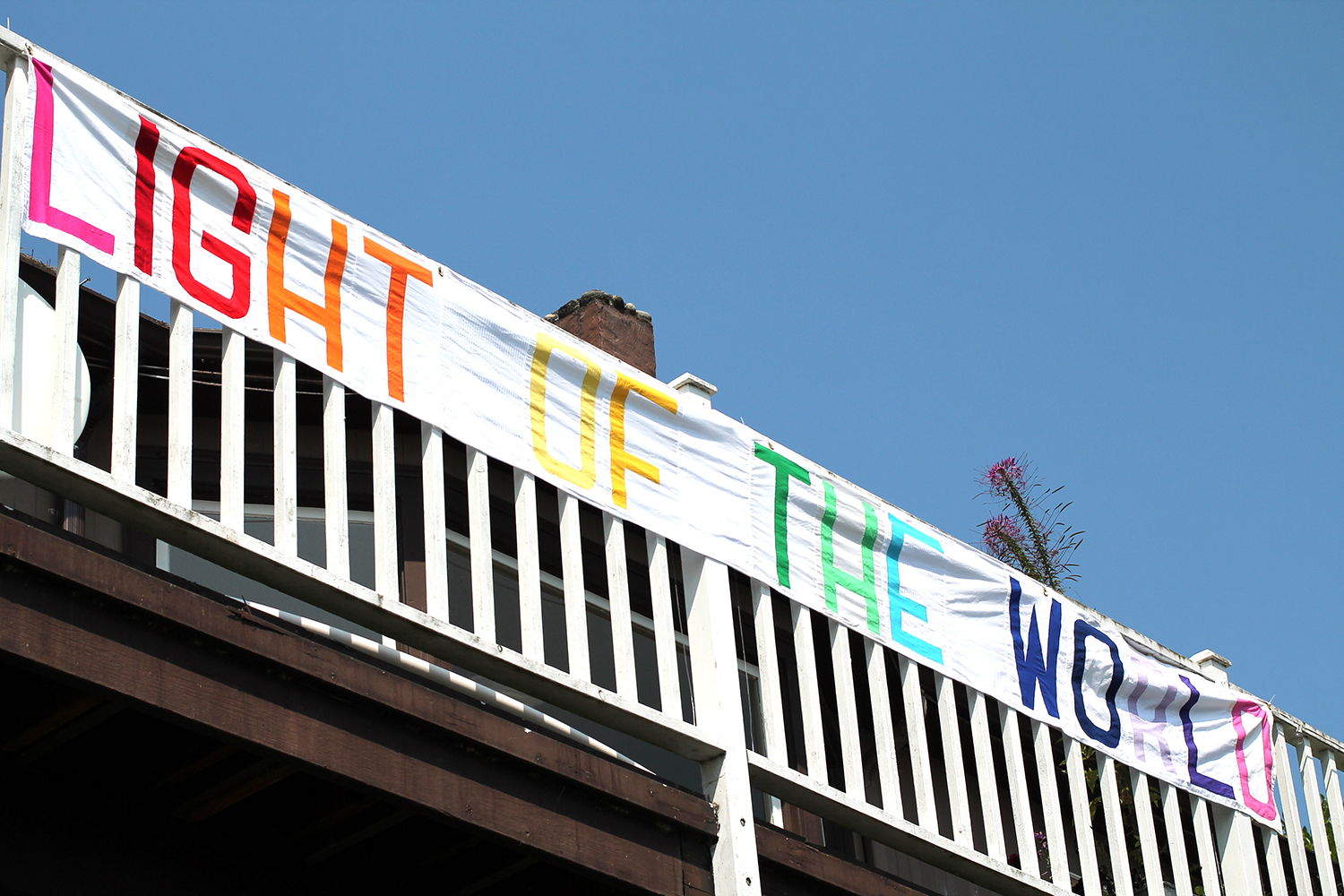 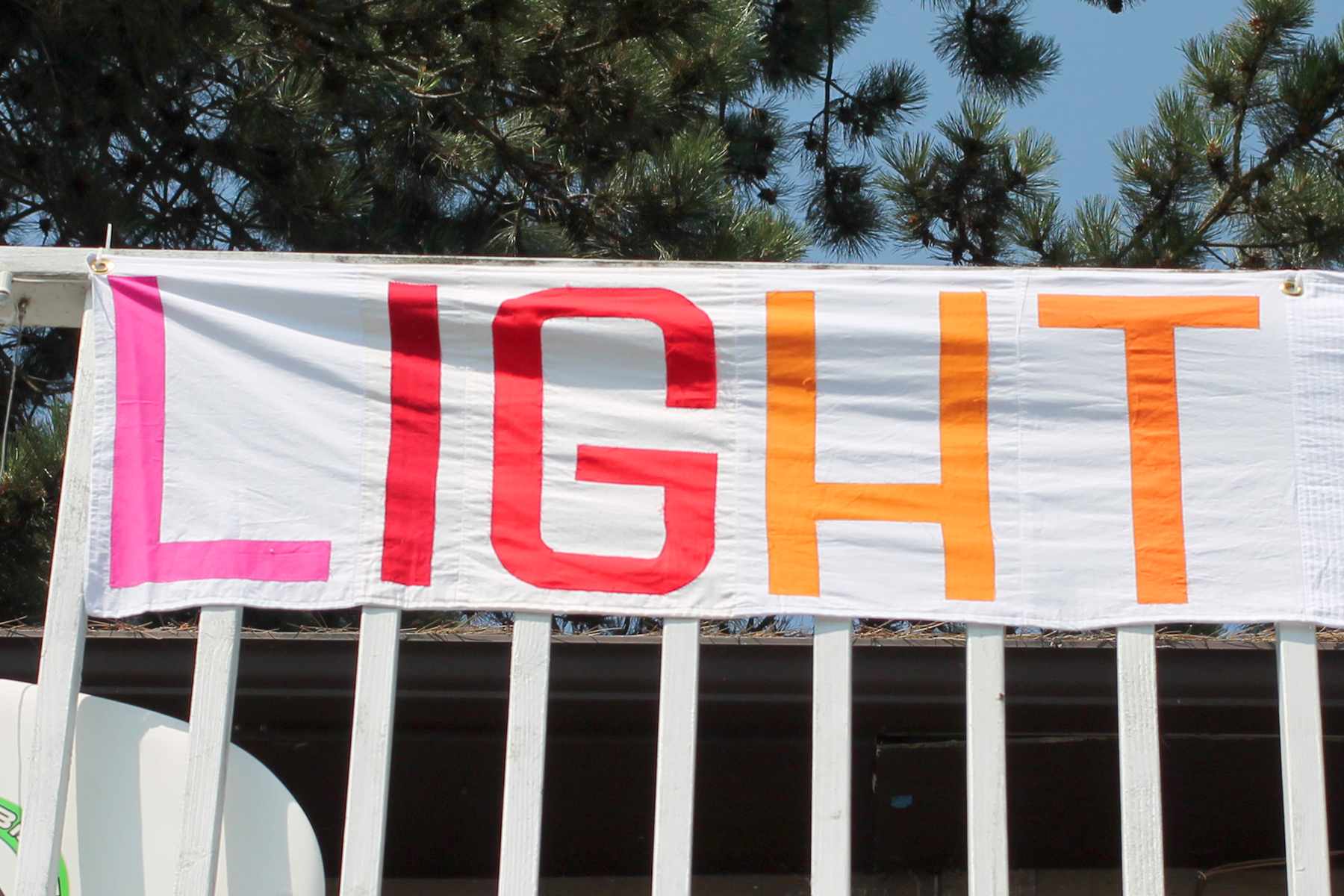 OS: Having a show on a hot day right next to a swimming spot was an A+ move, how did you end up choosing that spot for your piece?

JV: Honestly, the freedom of an Outer Space show was almost too much. LOL. Figuring out the location (which is normally the starting point for a show) was the hardest part. At the end of the day, as long as I was in Seattle, Lake Washington was always my special spot. When I had a car, I’d drive to a park and just sit for hours watching the gray water. And getting to host it at Holly’s was just a no-brainer! Plus, it had the added bonus of enticing folks with cool water to jump into! 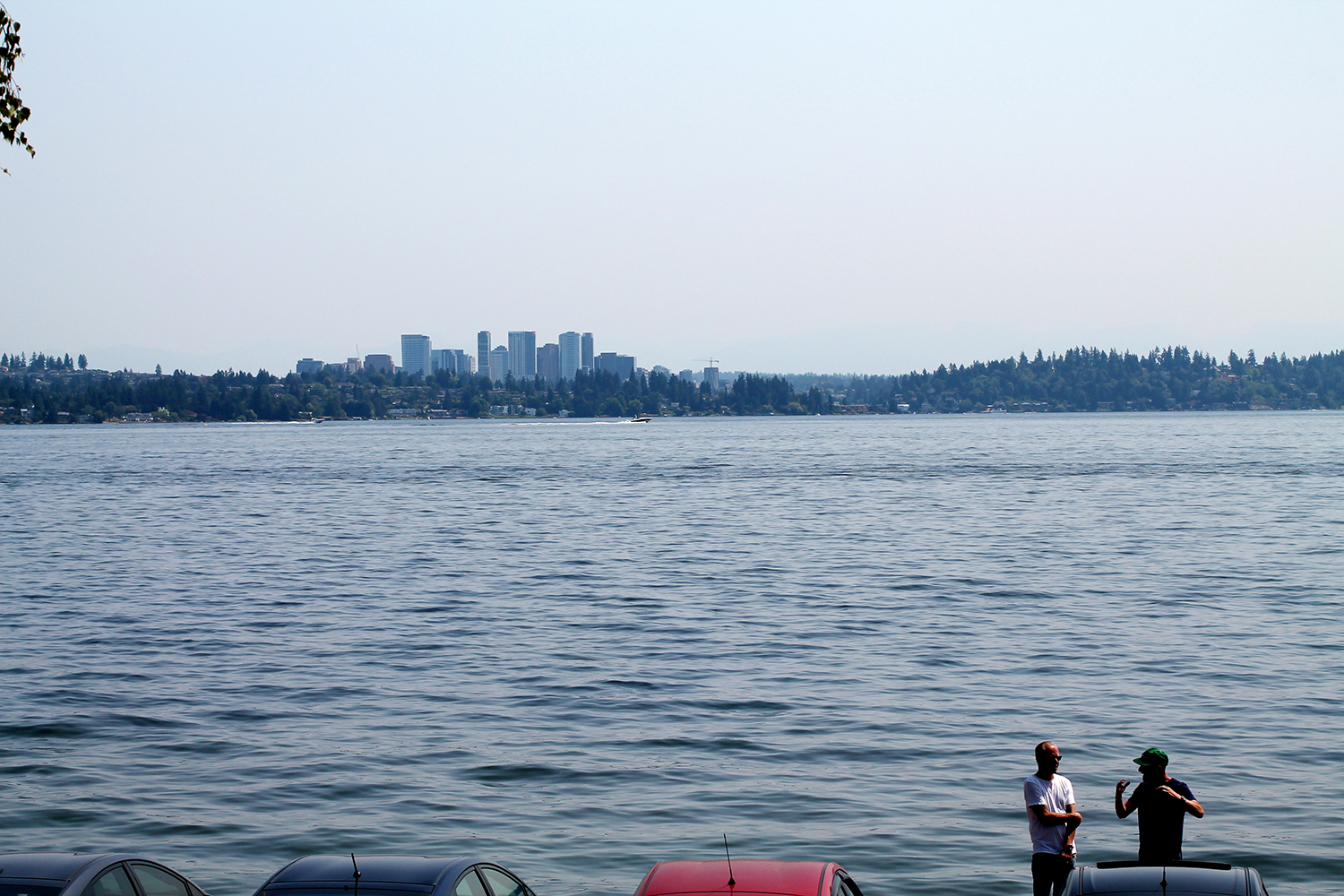 OS: Did you notice your piece shift meaning at all by being shown outside on the road vs. when you were working on it at home?

JV:  Hmmm, good question. I work in a basement studio alone in Bremerton – so it’s a pretty personal / solitary experience and I don’t tend to think of it outside the studio much until it gets outside of the studio. 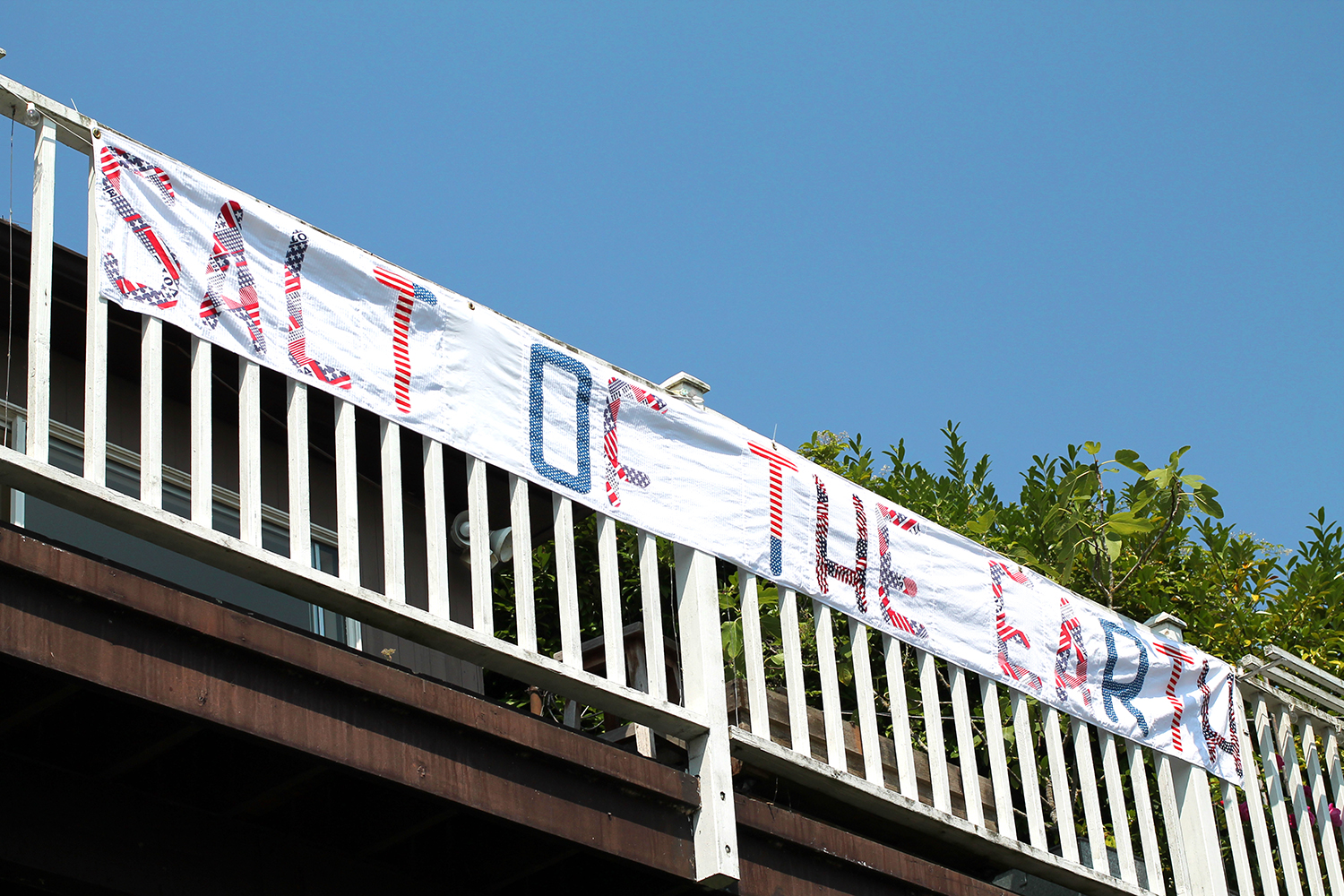 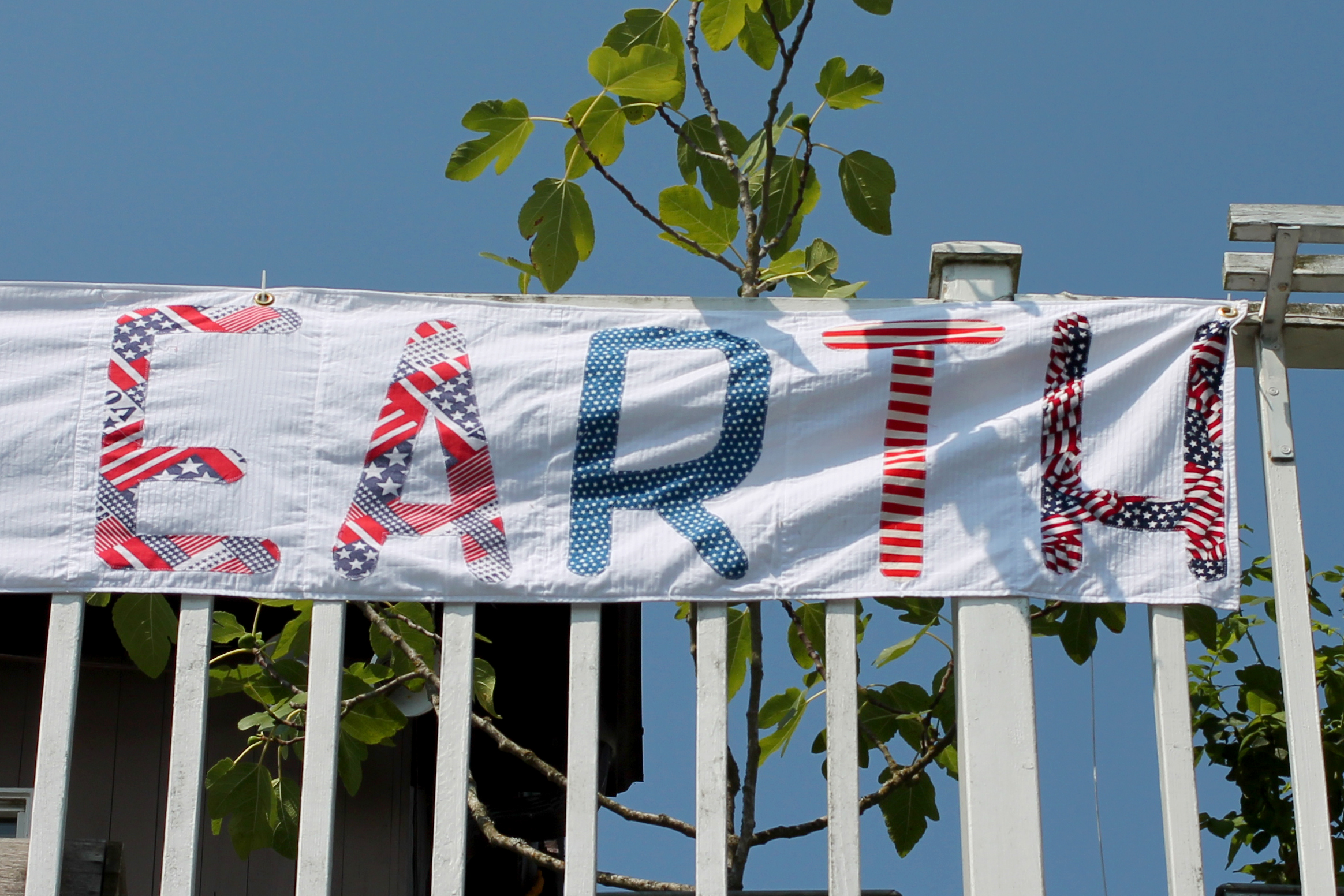 OS: How did you pick your different fabrics for the pice?

JV: This was the second hardest part – usually the fabric just jumps out. I went around and around with some tests and couldn’t find anything satisfying. The white background came first – cause I wanted to evoke that “purity” / religious tone. And then rainbow letters because I wanted to be clear that this was a queer reclamation. Finally the red/white/blue letters popped into place as an indictment against America’s “moral” majority. 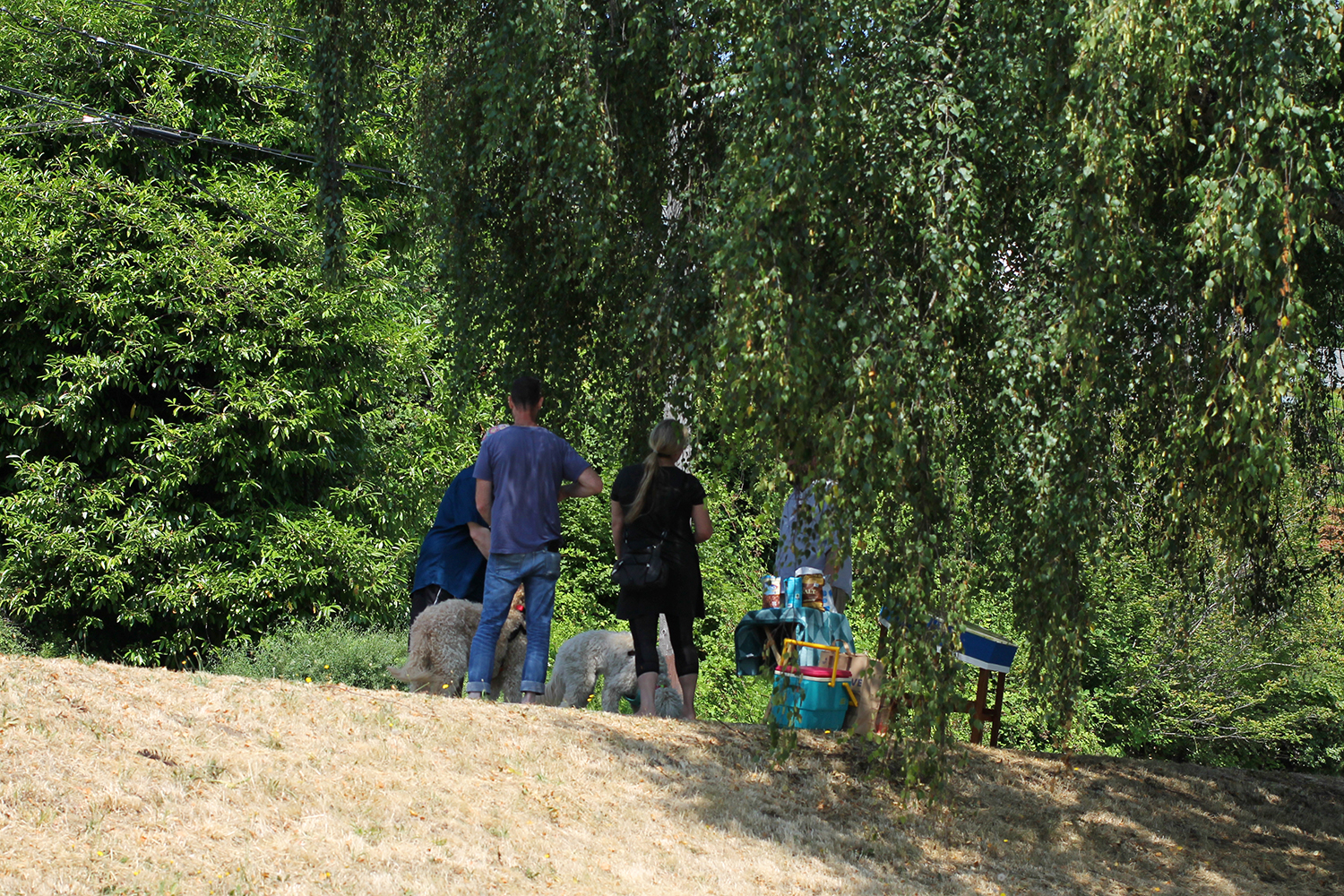 OS: There were a couple funny interactions when you were documenting the piece by your place in Bremerton that you told me about, could you mention what those were like and what kinds of responses you had at the show?

JV: Because the pieces are so large (16 feet long), I had to take them outside to document. I’m not a fan of making a big spectacle so I’m just trying to snap a quick picture and get back inside (it’s hot). As I’m clipping the LIGHT OF THE WORLD banner up onto our chainlink fence, I can feel a car slowing down and I’m just waiting for it…

Two minutes later, I take down the banner SALT OF THE EARTH. Angry man comes out of nowhere: 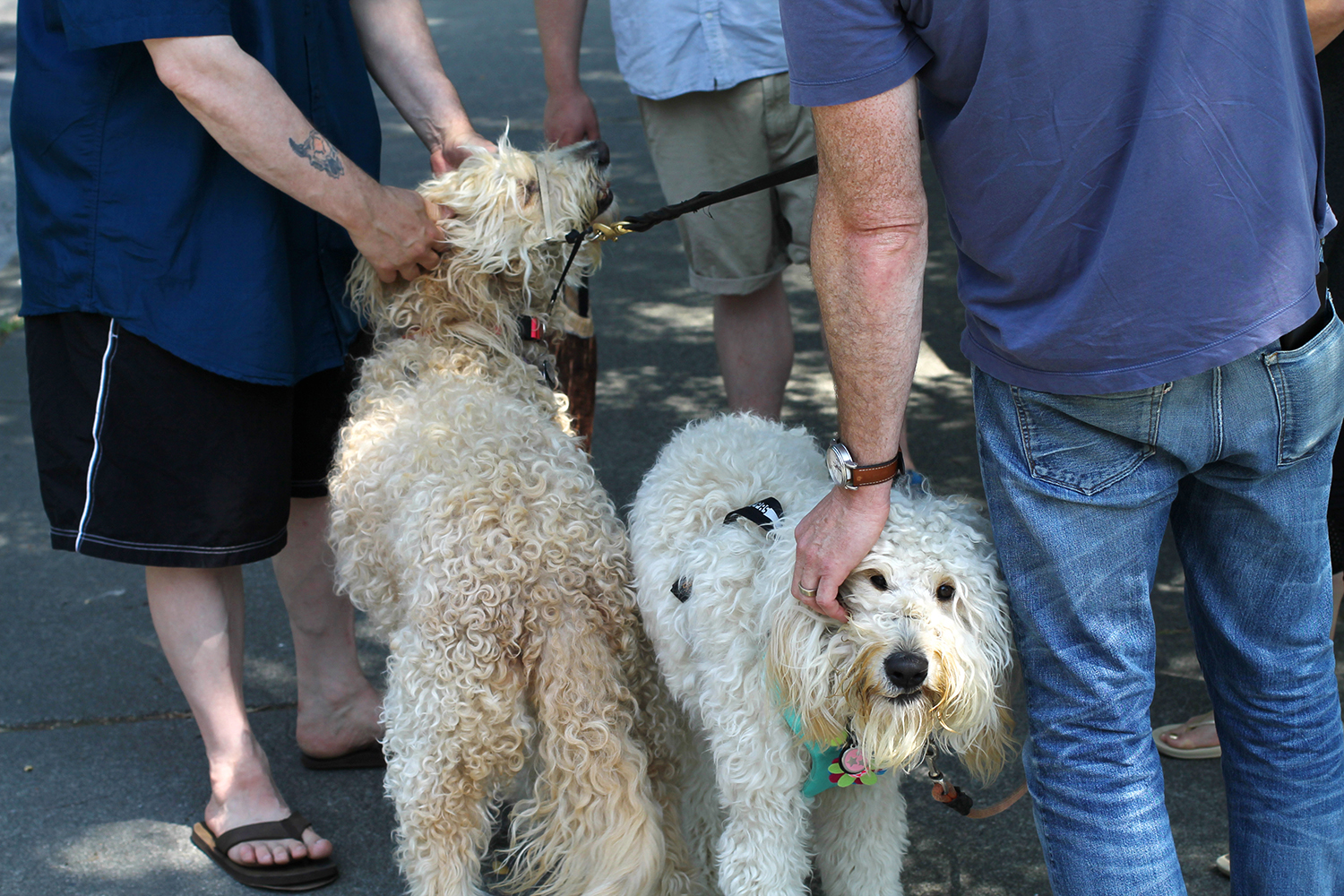 OS: So much of your work uses domestic objects as its material and subject–your quilts, drawings of blankets, the jam show–it’s part of what makes your work feel so comforting and healing (at least to me), what about these things call to you in your art making process?

JV: I think I use familiar objects because I’m literally seeking objects that comfort (both myself and the viewer). That alignment began when I started making quilts. (I had thought I was going to kill myself and I wanted to make sure my loved ones had something they could hold and remember me by). My practice (especially in collaboration with my husband, Ben Gannon) frequently centers itself around hospitality and comfort because it’s a hard world and respite comes from self-care and community. 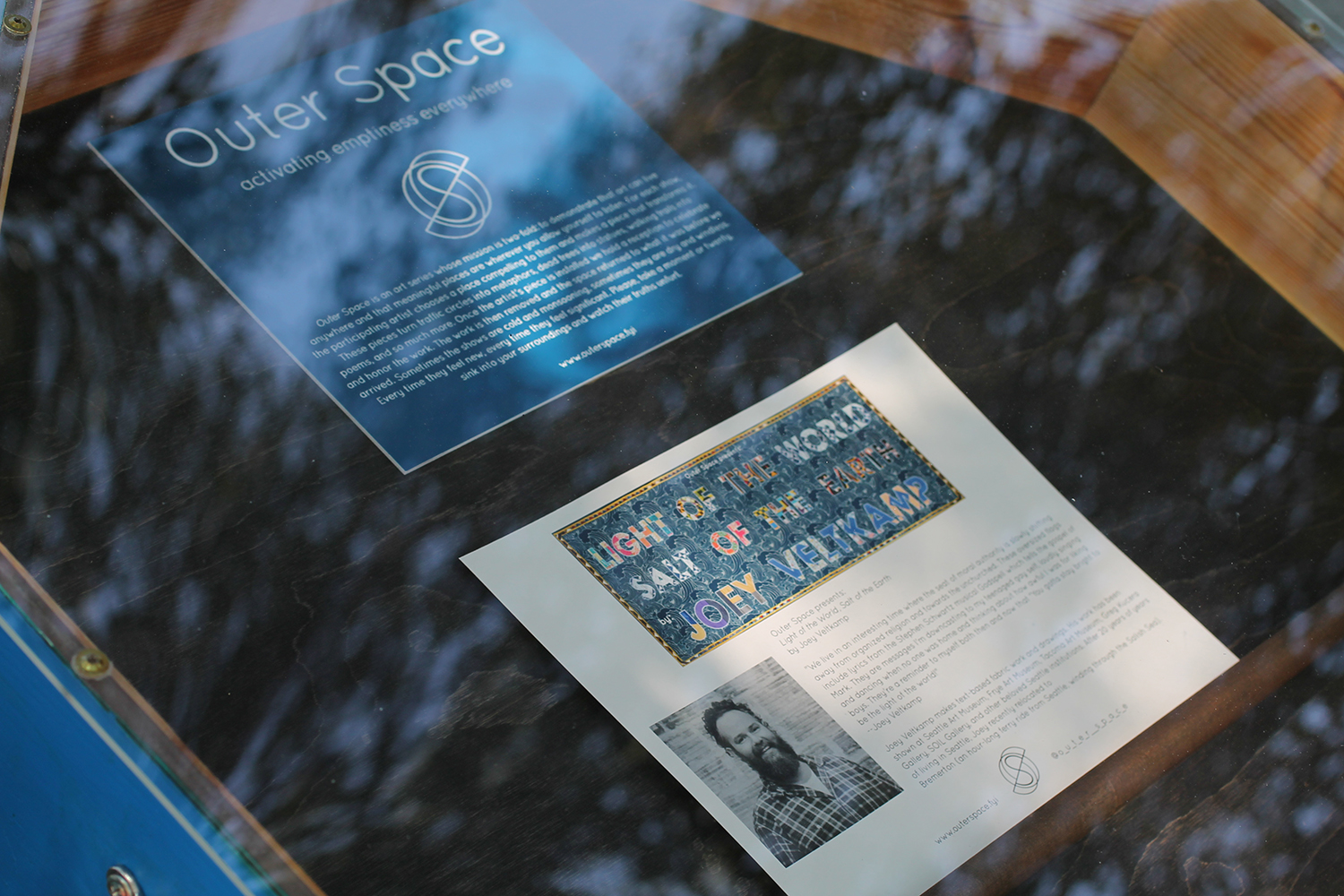 OS: What does the future hold for the banners–a new show?

JV: I went a little larger on these pieces because after this show, they’ll eventually be a in a big show of my work in 2020 and so I can mess around with scale again! 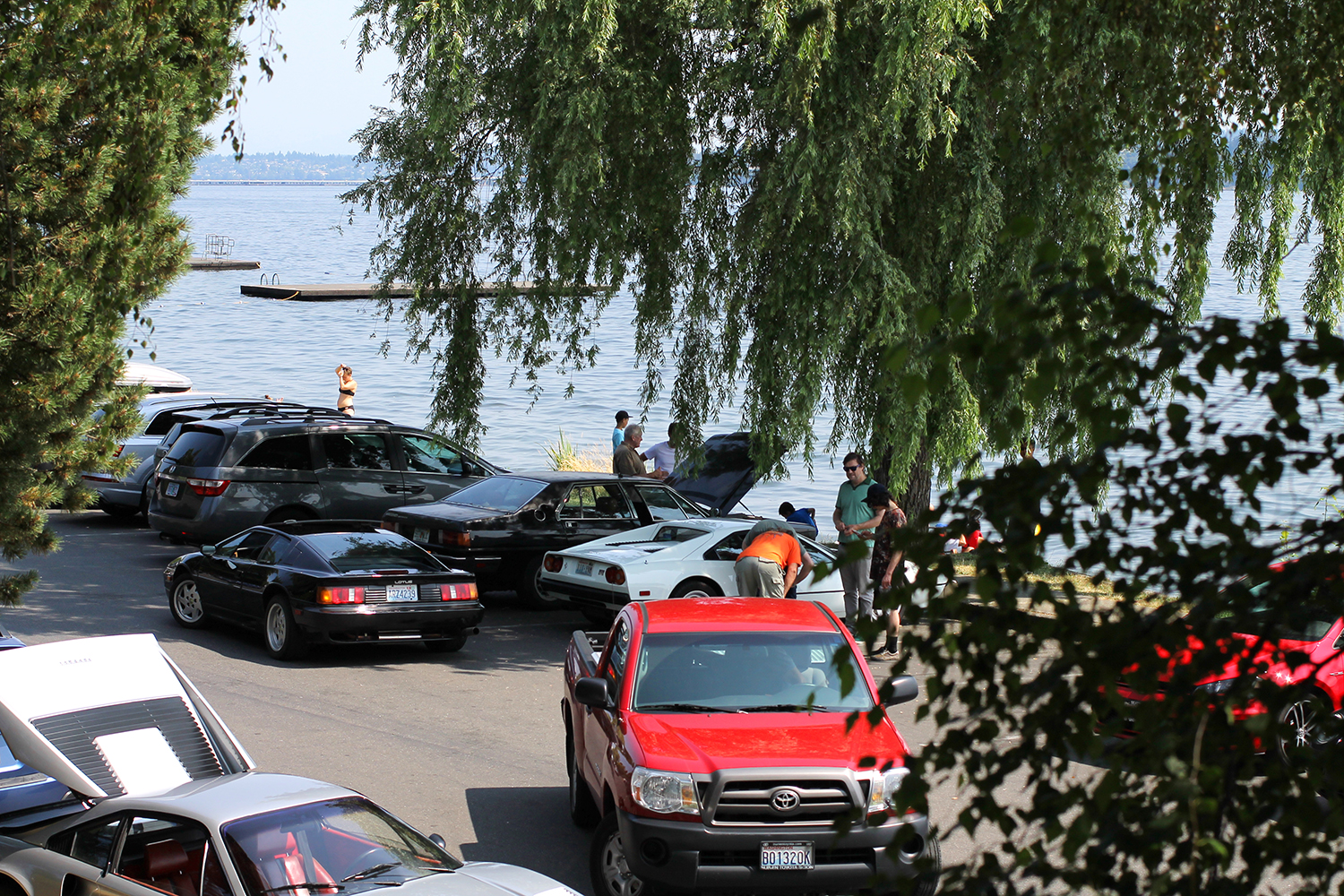 OS: Any memorable moments from your show?

JV: We’re kind of hermit-y and don’t get out much and so whenever anyone shows up, it just seems like a profoundly generous act. That’s my most memorable part – seeing whose orbit is currently in sync with mine. 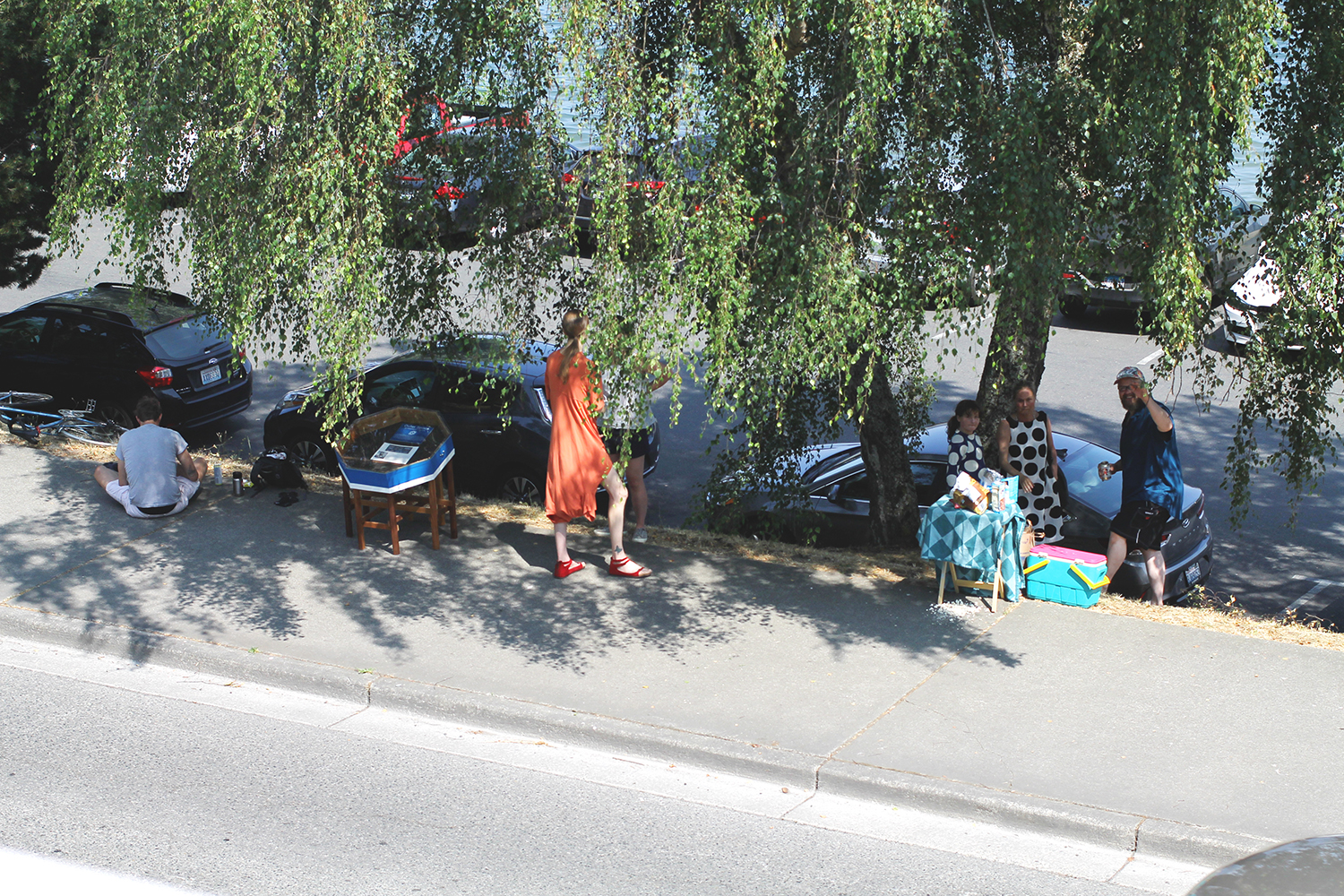 OS: What are you working on now?

JV: I’m finishing up a big piece for a hotel commission. And I’ll be in a show next month in Bellevue called Bellwether with two brand new quilts. I’m trying to knock out a couple of commissions before I settle into fall. And trying to do the occasional summer thing with friends/family/the kids. 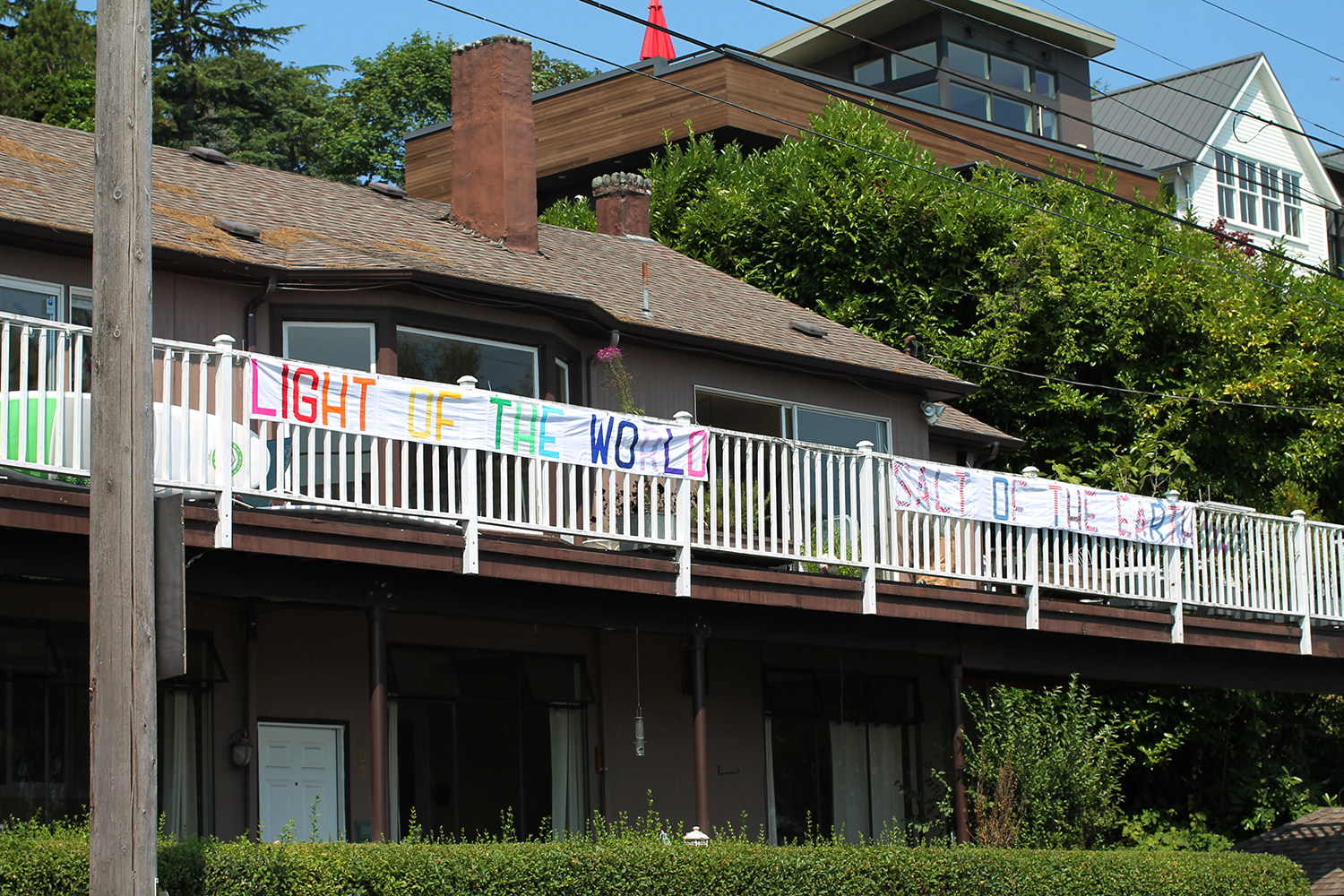 JV: It’s summer! So it’s so hard to pick a favorite out of all the bounty! Our sweet neighbor has been giving us zucchini squash from his garden – that’s been pretty delicious so I might have to go with that. 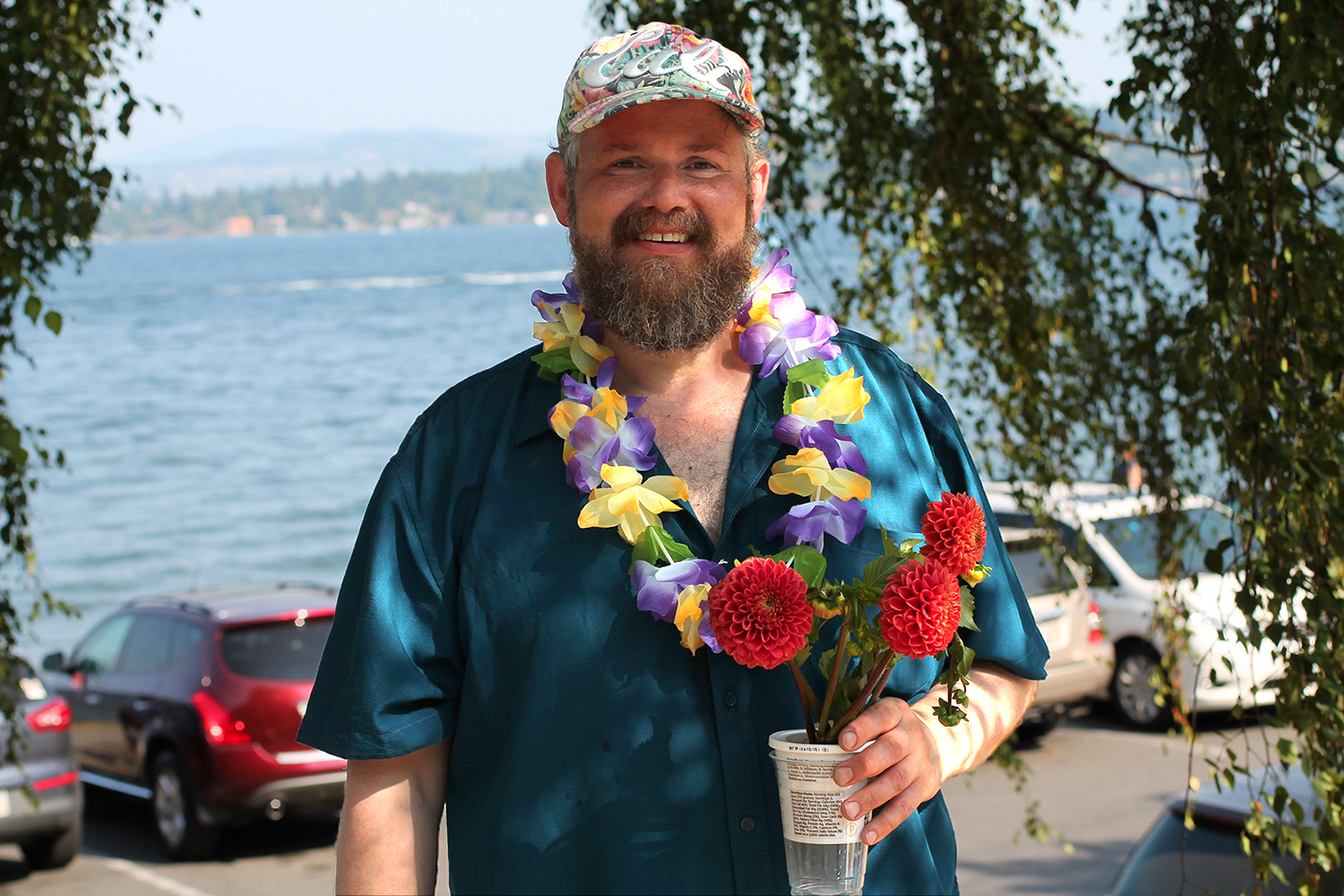