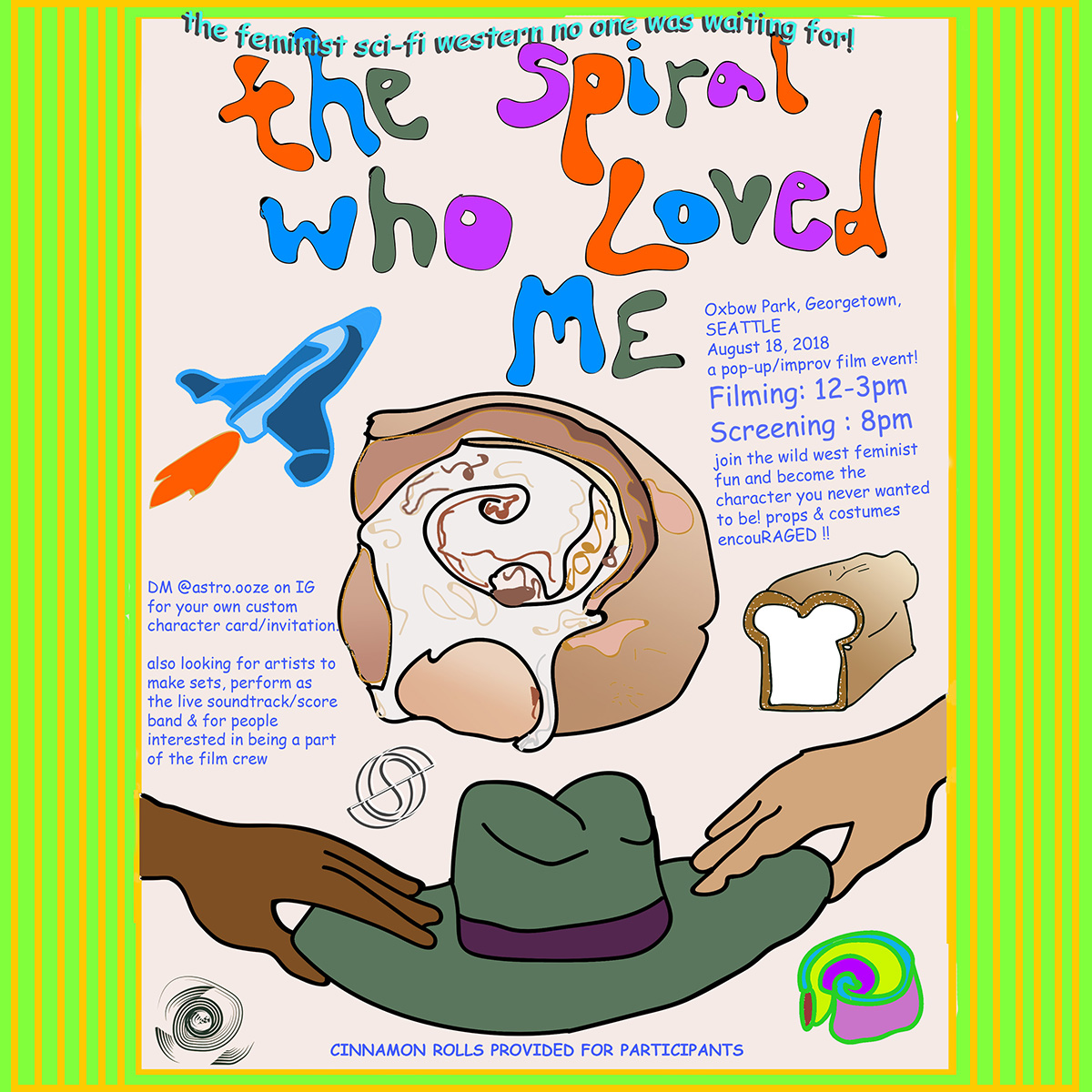 “The Spiral Who Loved Me is an improvisational sci-fi-feminist-western “plot-on-the-spot” video performance. Questioning the masculinity of the faux-mythologies of the American Western and Sci-Fi film genres, this piece resonates in a round dance, a mystery. Like spacetime, pastries are also curved. And indeed, in a science he has called geometrodynamics — ‘the dynamics of the geometry of curved, empty space’ — the cosmologist J.A. Wheeler describes how the very structure of our universe is none other than the vortex ring — a manifestation of the universal cinnamon roll, donut, kolache…a spherical spiraly treat. How can we renew our commitment to love and a state of ecological balance? Who are the true villains in a Western about nothing but cinnamon rolls?”
-Coley

THE SPIRAL WHO LOVED ME:

OS: In the sake of brevity I’ll spare you and everybody else any attempts of mine to sound intelligent, so for the first seven “questions” I’ll just list things I want to hear you talk about, especially in relationship to the The Spiral Who Loved Me.
First up: spirals

COLEY: Have you ever really looked closely at trees? They are all twisting, spiraling upward–signaling movement both internal and intranal–toward the largest source of energy in our local solar system (the sun). The Tree of Life, of Knowledge, of Vitality, of Polarity, of all Vegetal Icons, etc. is a series of archetypes recounted in folklore, culture and fiction that represents the spiraling of the life energies in the body (often portrayed as two intertwining streams or forces coiling upward). These symbolic representations of energies remind me, as an artist, that all initiations are cyclic spirals: to attain any summit of a thing/thought/movement we must circumambulate around it until all of our wiggles balance in a vortex. As a child I was fascinated by the various shapes of galaxies and star clusters in our universe–the whirling ecstasy of vibrations made stunningly visible in light waves/particles and the mattering of matter (a spiral galaxy is chunked like a flat disk with a thicker bulge in the center. Bright spiral arms start from the center and then coil outward like a flame-engulfed fidget spinner. All spiral galaxies rotate; our own Milky Way completes a single revolution about once every 250 million years). As a faux-adult I am preoccupied by the connections between the form of spiral (cinnamon rolls)/the torus (donuts/kolaches/pies) and how all physical Beings we encounter mirror these mathematical and spiritual delineations. By dancing and baking the macrocosmic dance of the SPIRAL, the orbiting of planets, or the dance of the quantum strings, my artwork can attempt to incorporate the creative vibrations and extraordinary rhythms of the cosmos (especially in wiggly higher dimensions). Even the passions I seek in life, in a round (never square) dance with all my friends, I will always call it a mystery. 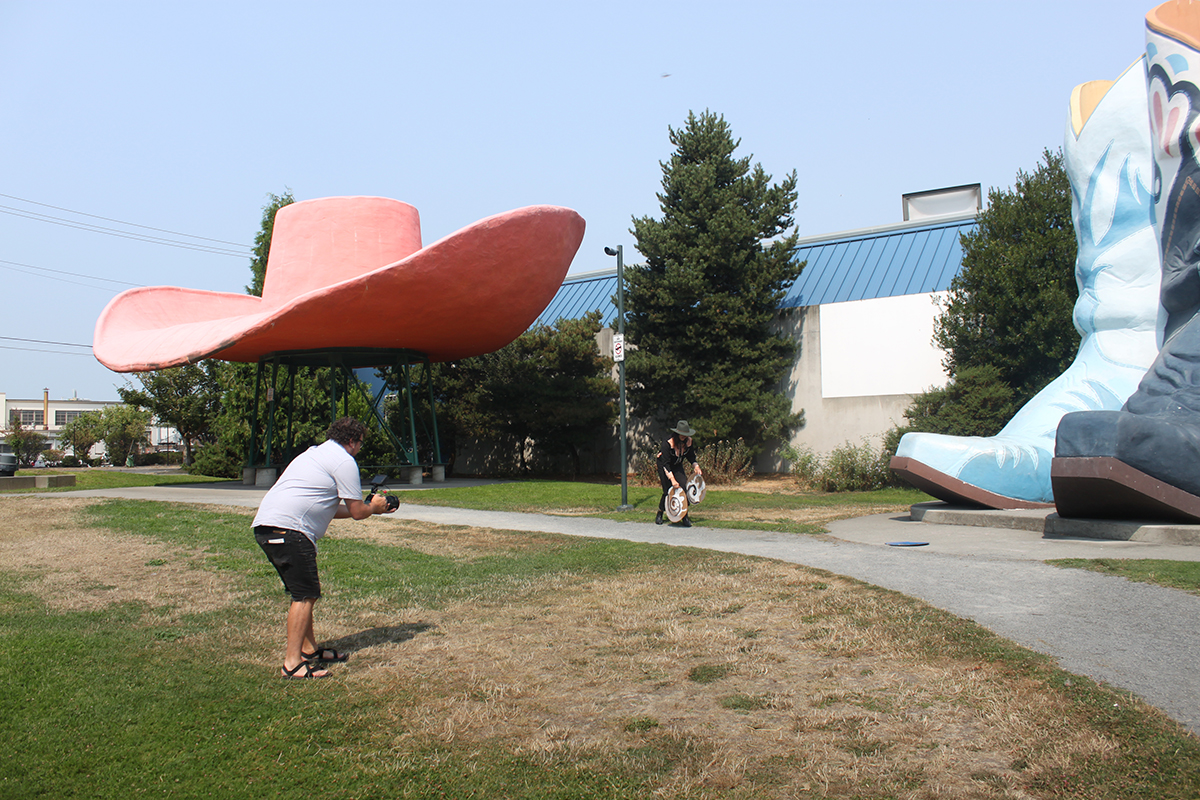 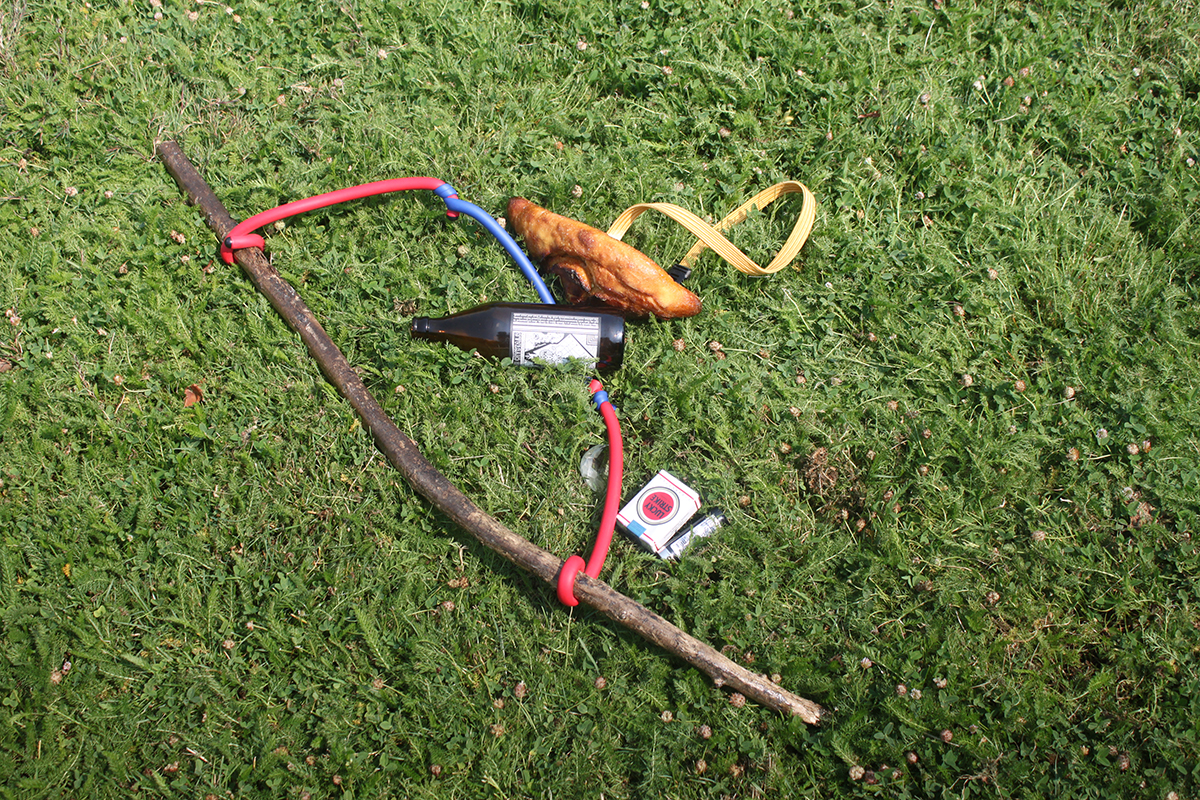 OS: Cinnamon rolls/junk food
COLEY: Cinnamon rolls need not be junk food. The idea that any food is junk is a biting reminder of the overwhelming engulfment of white supremacy and hyper-capitalism–both which seek to destroy the same abundance: Life. Also, I often wonder–who gets to decide what is junk food? Aren’t all bodies and their dietary needs different (though I do believe that there are certain ways we grow and manufacture food in the US of America that is completely JUNK for the planet/our bodies)?? A cinnamon roll consists of a rolled sheet of yeast-leavened dough onto which a cinnamon and sugar mixture is sprinkled over a thin coat of fat (I’ve often used coconut oil in my own CRs). Truly, I love thinking about the variety of forms that spiral-shaped pastries can take (even if they are not cinnamon rolls) and how the sharing of home-cooked pastries can serve as such a wonderful, humanizing ritual. And, of course, I wanted to make cinnamon roll tumble weeds because the just thought of that made me laugh. 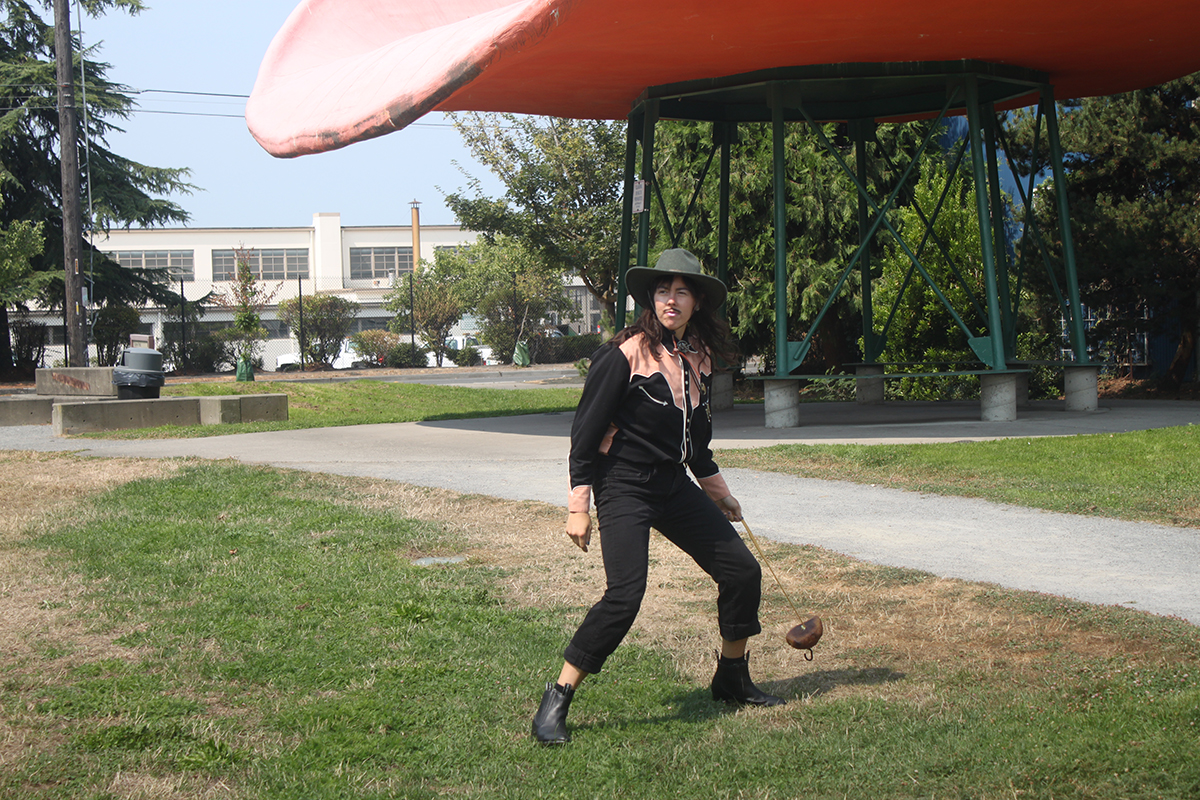 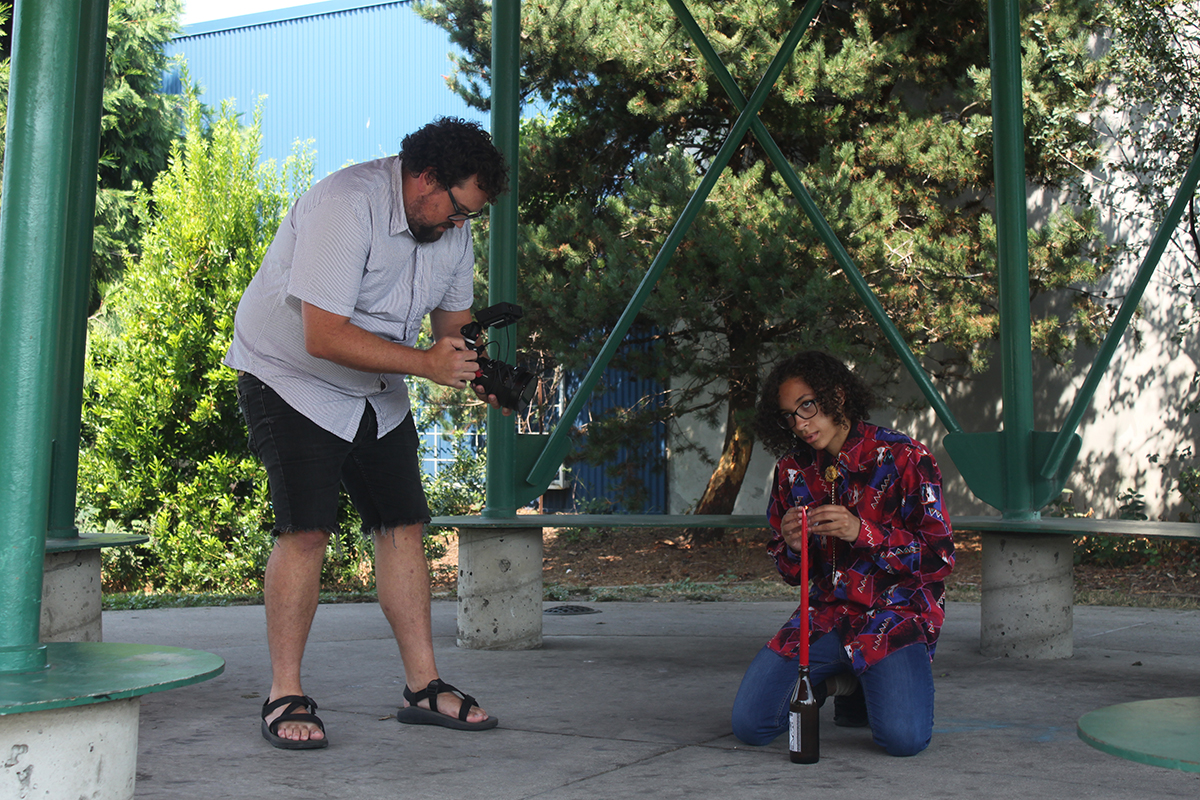 OS: Westerns
COLEY: The past year and a half I have been interested in Westerns and the horrifying version of ‘America’ and the ‘Wild West’ they portray. Growing up in Nebraska, I really always had a deep dislike for country music and rodeo style and the ‘old westerns’ that so many of the people around me loved. Now I am fascinated by the old singing cowboys–I love how in so many Westerns the performance of identity gets so stretched out that they no longer ‘function.’ The extravagant frills of their clothing styles are so queer to me: I want to be a genderless cowhand sweating out in the field on the back of a horse. It’s hot. Of course the Western as a genre has always had a significant focus on intense rivalries between men, fetishization of phallic weaponry and left women to represent a domesticity that threatens a cowboy’s freedoms (not to mention the white-hero syndrome). I think the film that really got me reeling over queering Westerns was Johnny Guitar. Joan Crawford has always been one of my favorite actresses but damn–that movie gives me the QUEER HEEBIE JEEBIES! And I have to make a nod to Thelma and Louise. Is that a Western? It should be, I guess. Oh! And Calamity Jane. Probably still one of my favorite films of all times. 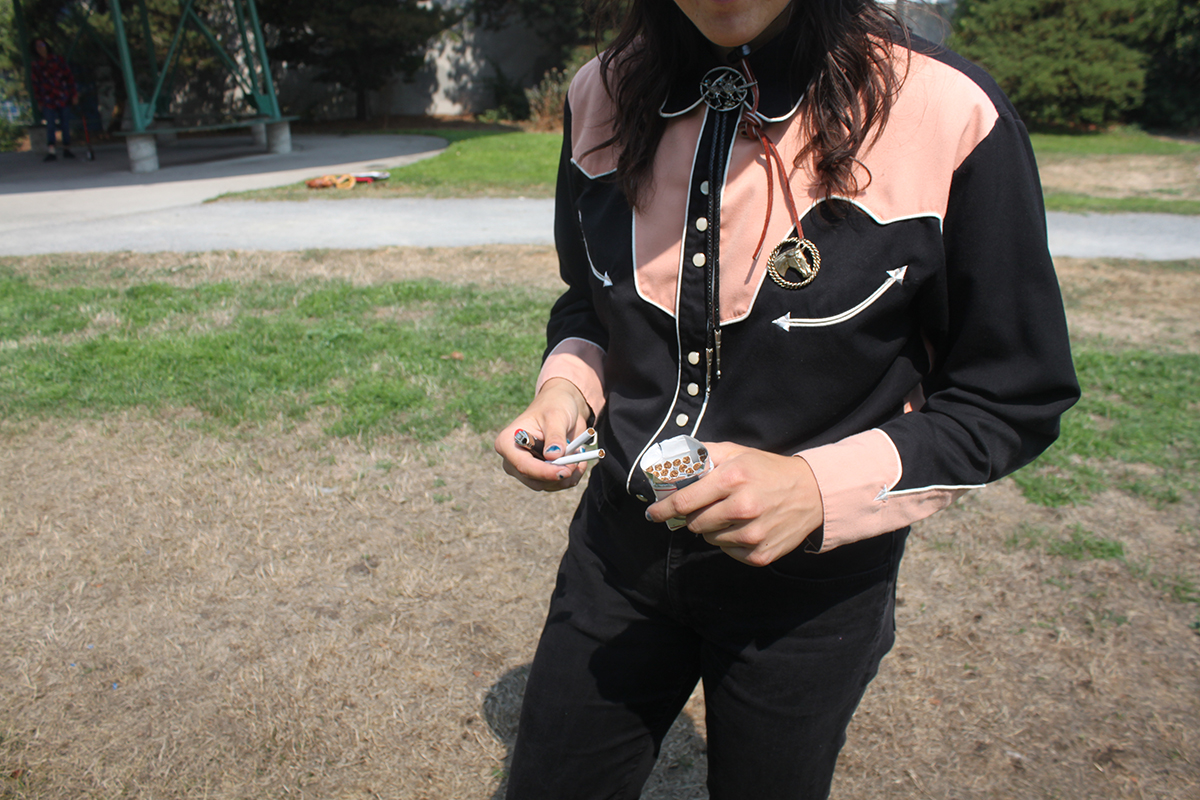 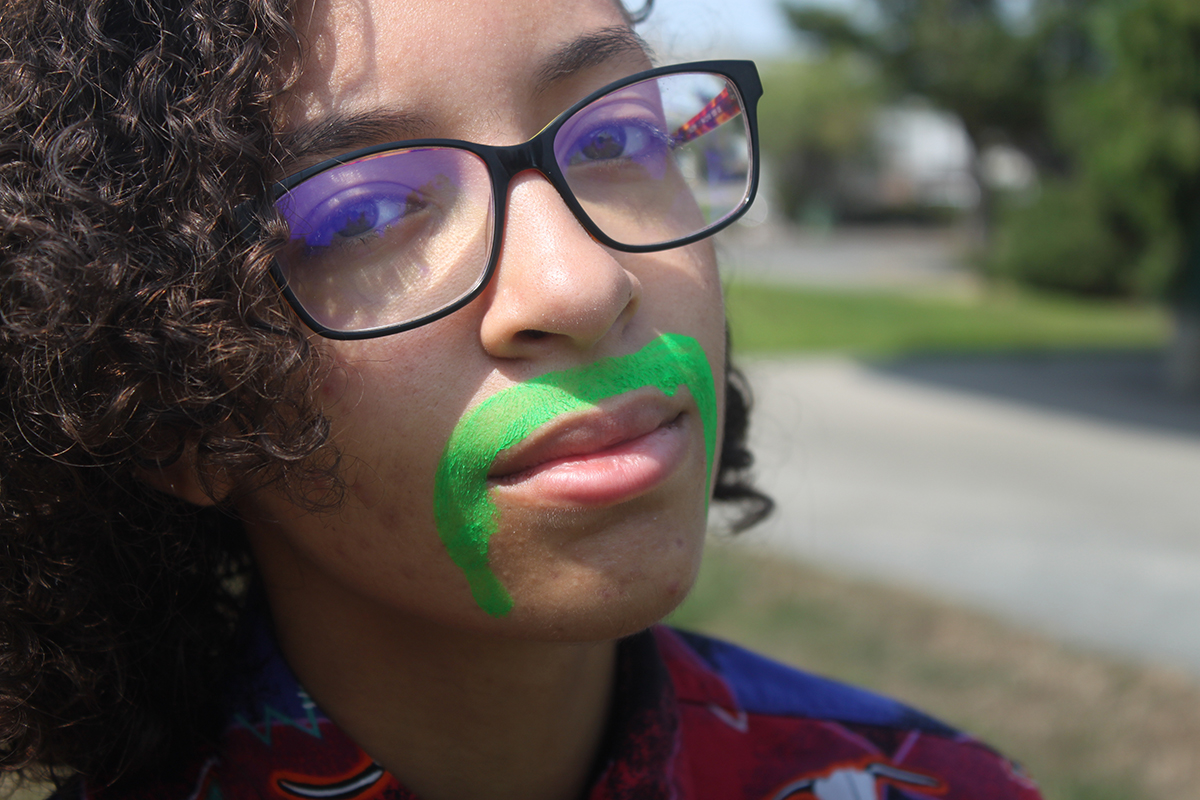 OS: Sci-fi
COLEY: I am a speculative sort of person. I love speculative fiction. But is it always fiction? Maybe it is just the truth. I need to read and watch more sci-fi than I do. But I love outer space so I always tend to gravitate toward stories set in other dimensions/out beyond our atmospheres. And I do enjoy Octavia Butler. I also think that sci-fi, afrofuturism, latinxfuturism, etc. offers amazing possibilities to challenge heteronormative and white-biased cultural assumptions. So for me, again, it’s a fascination of using storytelling to prompt questions of interconnectedness, technology, identity and hope. 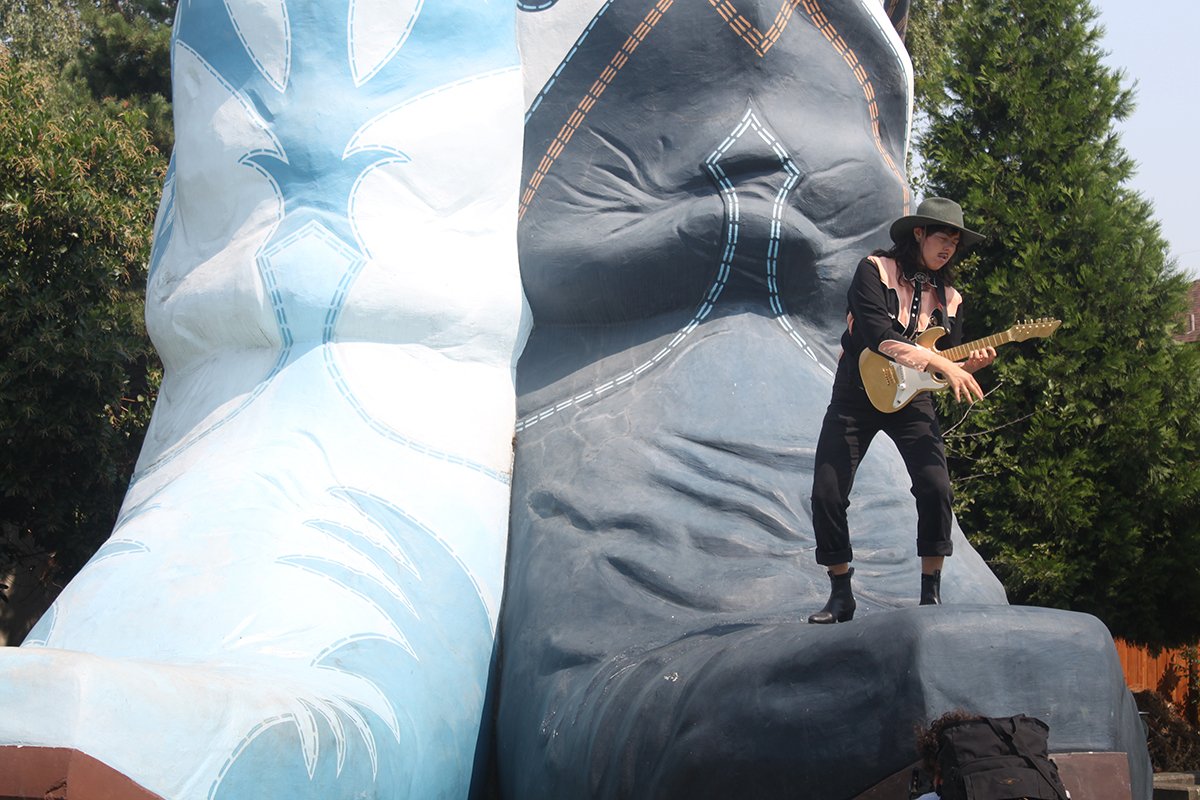 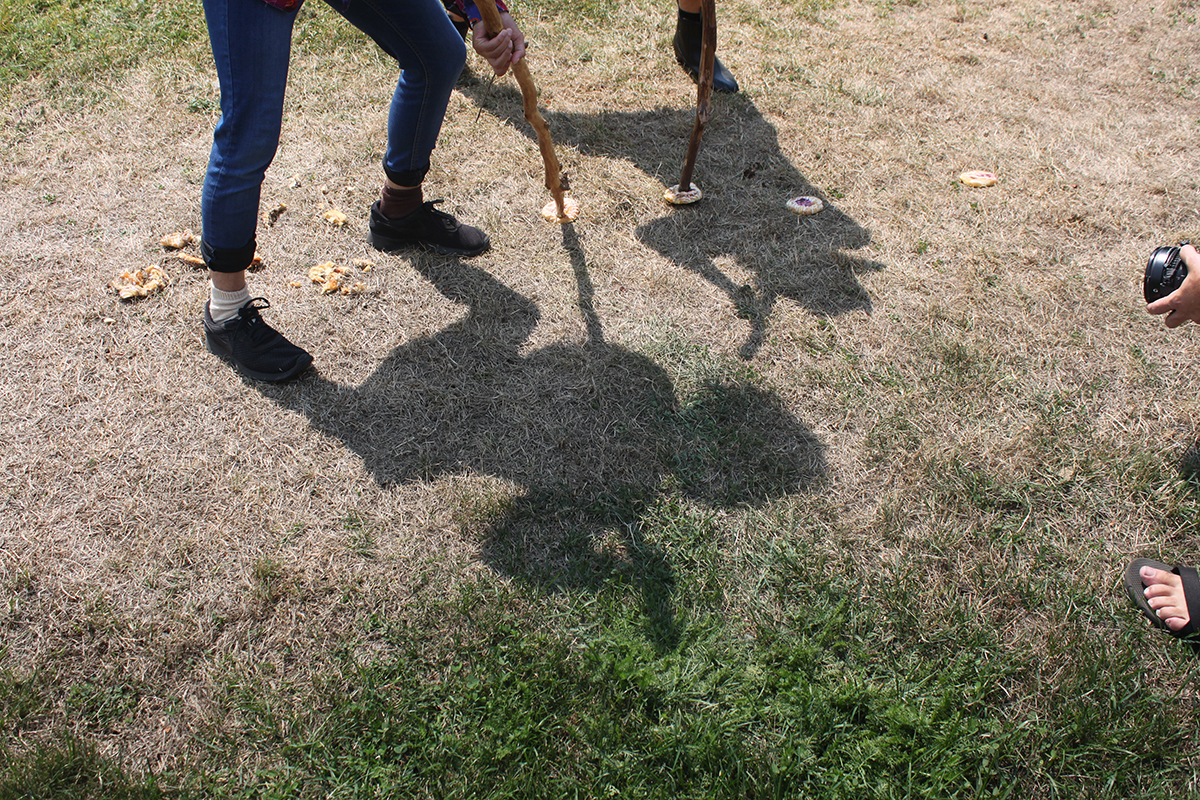 OS: Feminism
COLEY: Feminism is the cornerstone of my life’s work. Whether that be in libraries, teaching, creating art, performing music or in my day-to-day interactions with other Beings. Feminism is a call to constantly be on alert for & working to dismantle the varying systematic oppressions that give advantageous power to white people. Feminism means listening–listening to the lives and issues of cis and trans black women and women of color–and then acting through nonviolent means to correct injustices (without making my social justice work about me). It’s a framework of love. I do not consider myself a cis woman but I am definitely a feminist. It’s way past the time to scrub up white lady tears and really look at how we as a collective can use our actions to intentionally destroy the boring borefathers of white supremacy and the human-centered way our species has planet earth under a life-killing chokehold. 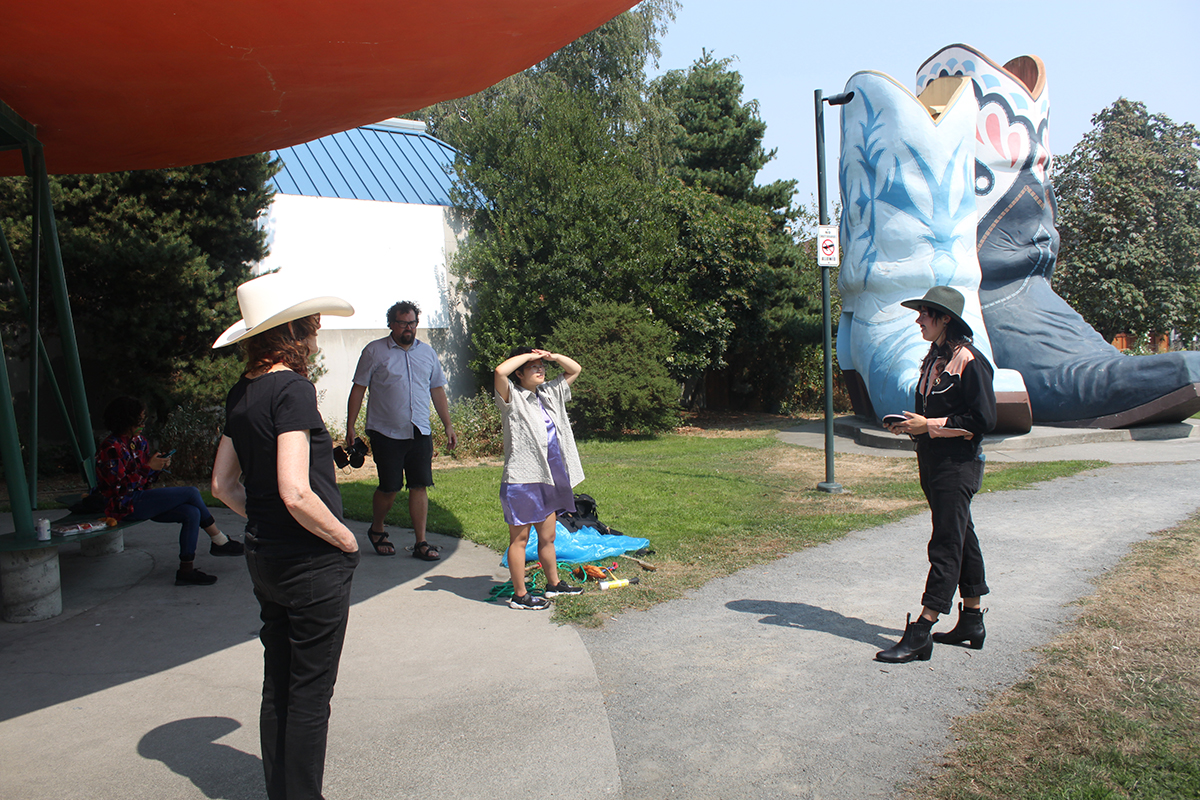 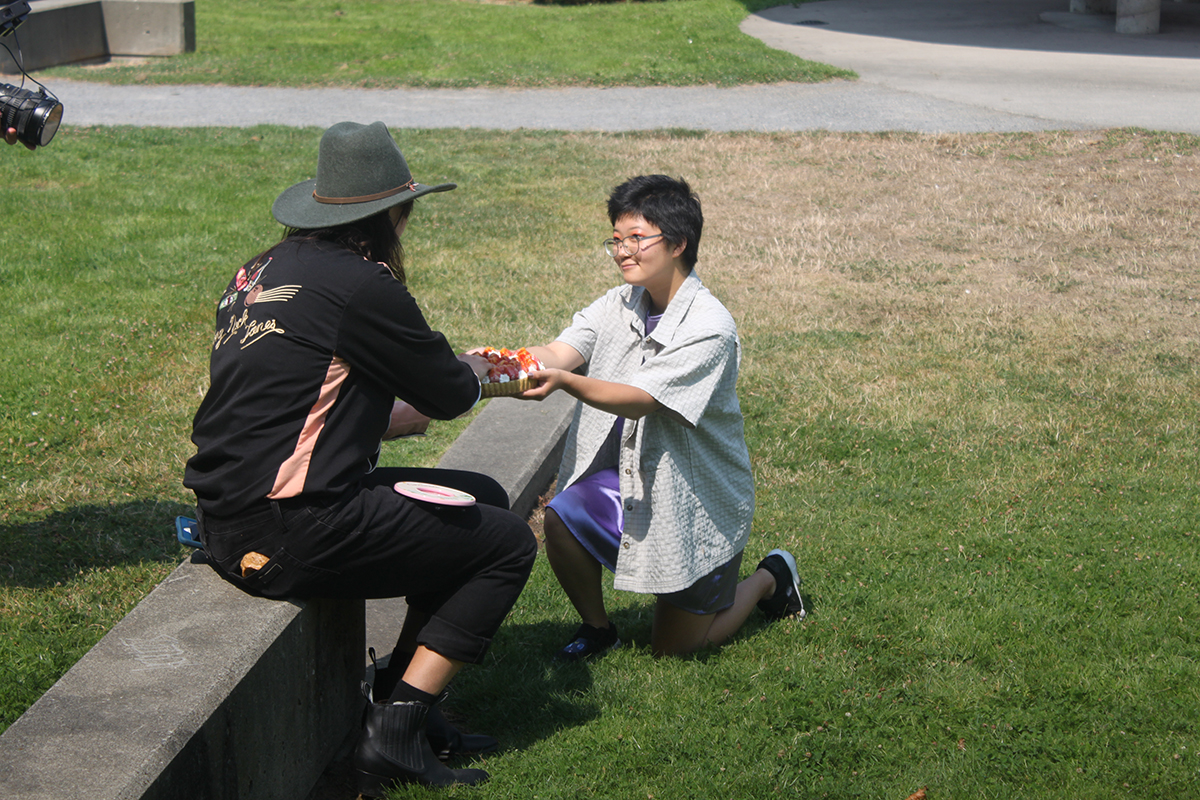 OS: Ecology/Landscapes
COLEY: I can rattle on and on about ecology–I am fascinated by the complicated relationships between food production/consumption, prairie history, soil health, my midwest pseudo-farming background, the ubiquity of corn/wheat/soy, etc. I really recommend people watch The Symphony of the Soil (which you can watch for free with a Seattle Public Library or King County Library System card on Kanopy). It made me cry. I just love thinking about how we are all made out of the humus of the earth–which is made out of the humus of the interstellar plane!! The design of life is so intelligent and interwoven…dare I say SPIRALING together. Big farming practices (where most farms are controlled by a few hands) jeopardizes agricultural production as well as distribution of the food supply. If we really want to be ecologically responsible we need to stop factory farming and harmoniously manage Earth and all the resources that she provides. We must be ethically and politically involved in (wealth, water, clean air, etc.) distributive justice and must support policies for sustainable agriculture remembering that eating is a moral act. Our planet is in the throes of ecological devastation–what wars are we supporting with our diets? With our consuming? I am very guilty of being a part of the capitalist consumption that is causing all of this 2018 orange doom glow all over our planet. Maybe I should start by getting back into learning all that I can about different plant, fungi and animal species that coexist with me on this wonderful Earth. 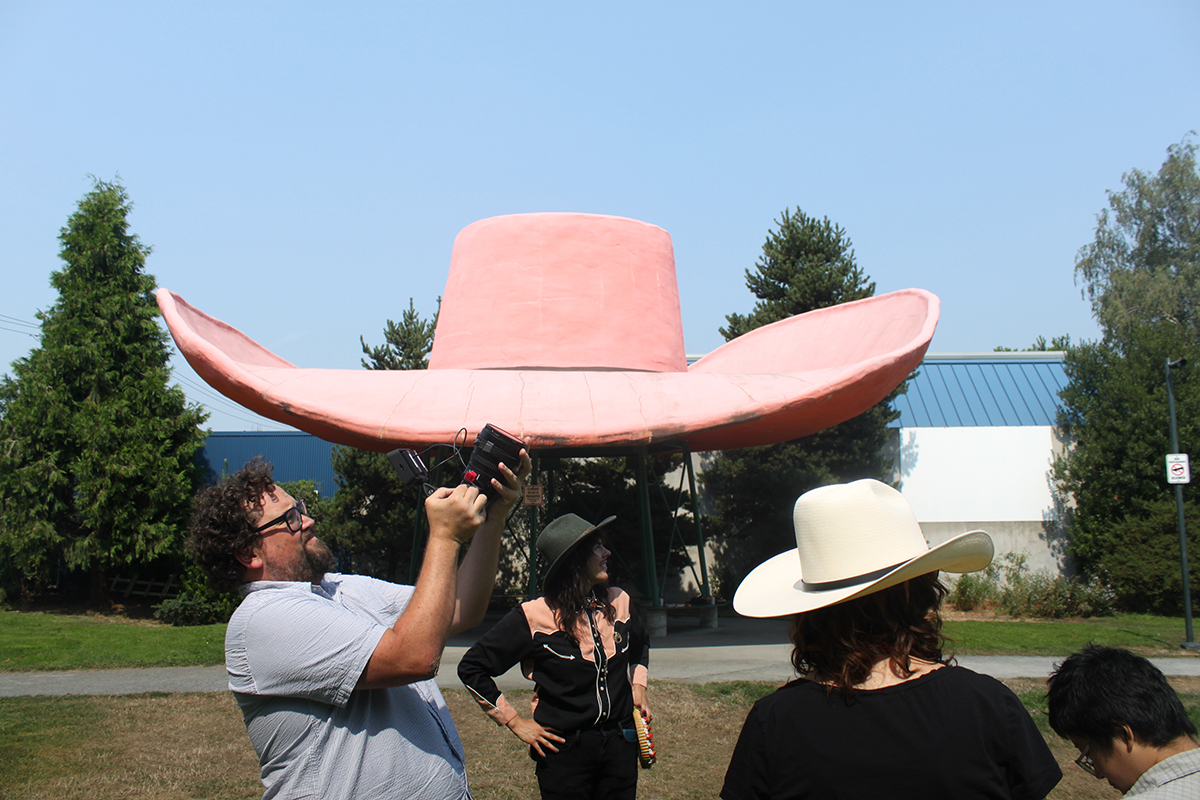 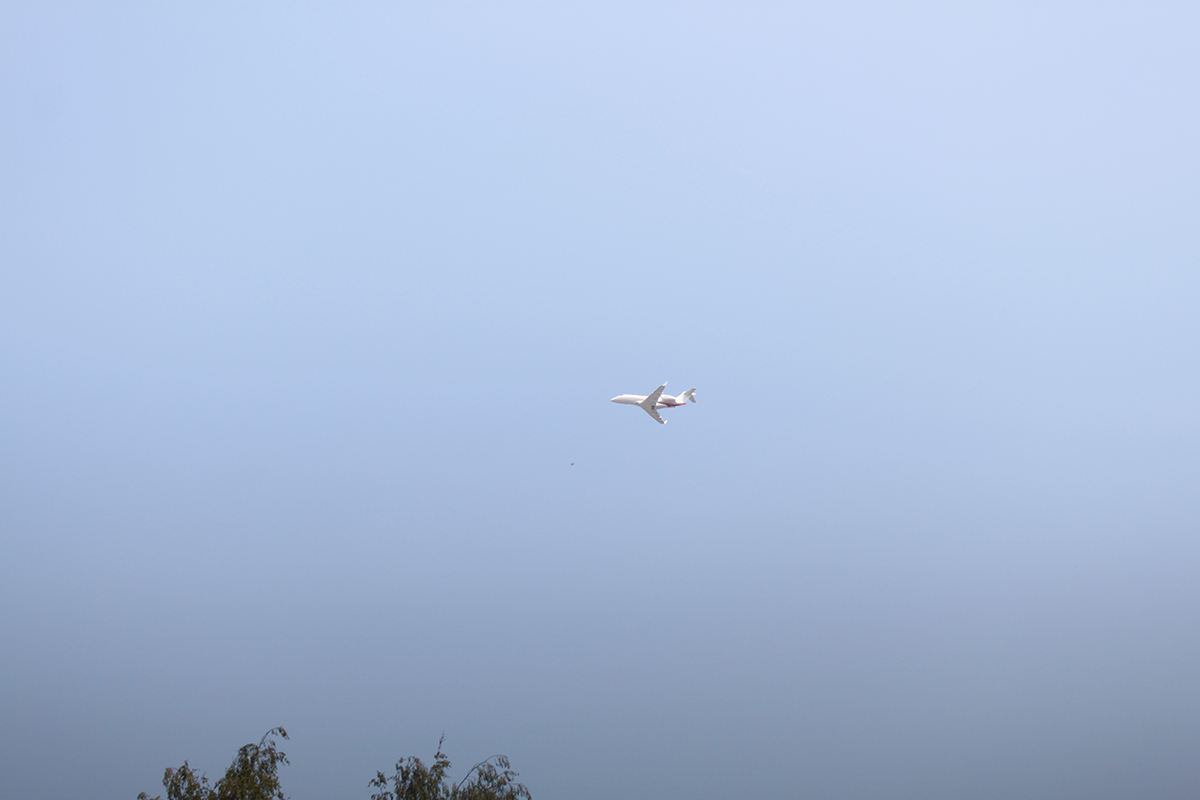 OS: Rock n Roll
COLEY: Would it surprise you to know that I also love rocks and geology? And since I love cinnamon rolls (& pastry swirls of all sorts!), I love adding rocks to my rolls. MUSIC! Music ain’t nothing but a spiral. A spirally spiral. When I play music (or listen to it), the recurrent moments of crisis and decision become growth junctures–those spiraling points of initiation/invitation which point toward a release or death from one state of being and birth/acceleration into a higher memory of existence. If I am really performing music properly, I completely lose the ego-identity of Coley Mixan. That being said, you can download my music for free on my bandcamp. 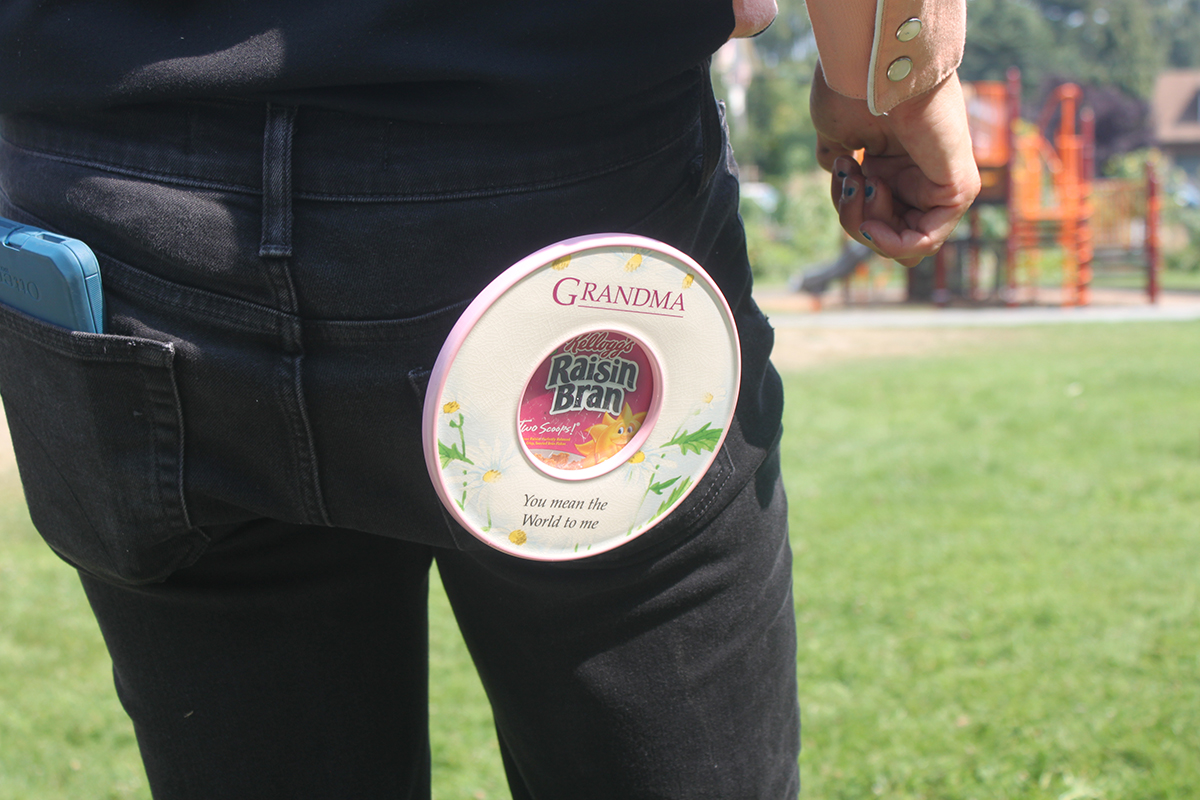 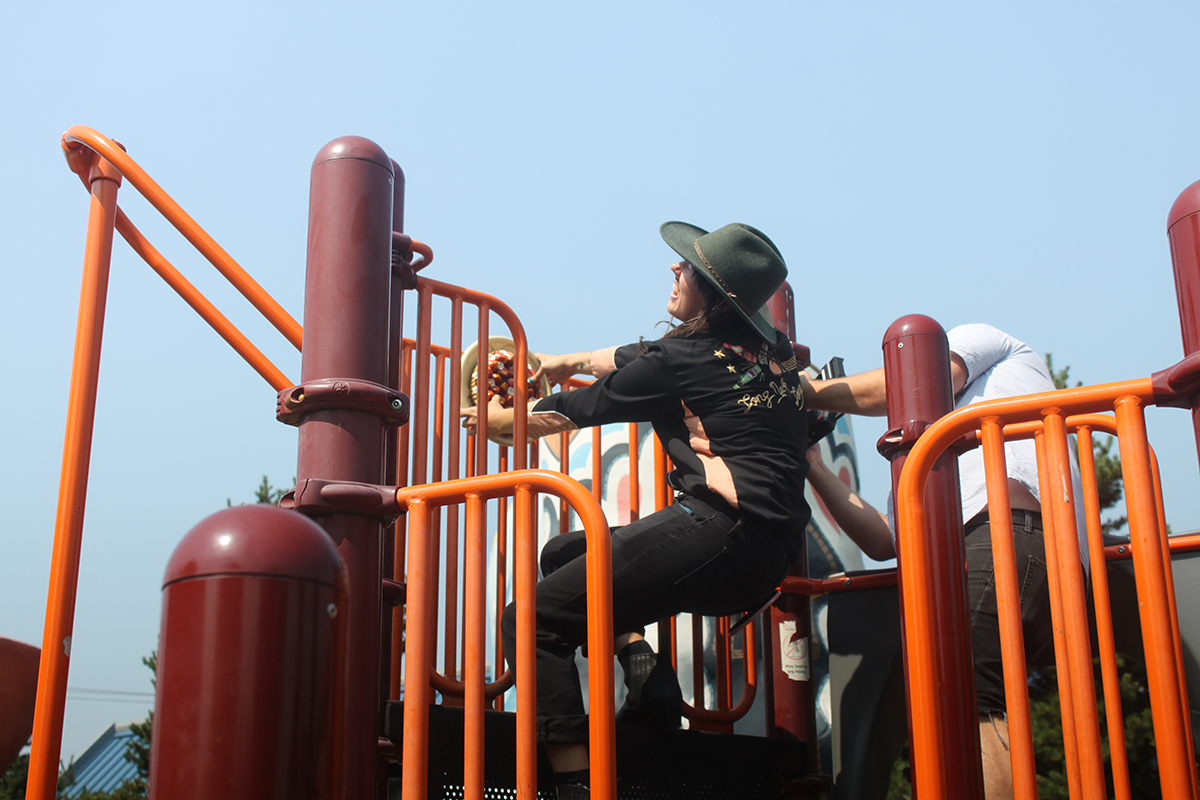 OS: Do/did you notice your art shift in meaning/perception/anything at all by being made and presented outside of a gallery context?
COLEY: I love presenting work outside of a gallery context. If anything, I never feel very comfortable in a gallery. My artwork isn’t precious. It’s about appreciating the moment I have to get to be and create with Beings I love. The Outer Space series is such a humbling way to think about framing my work: in a public park! With public surprises! The flexibility of choosing a park in Seattle and then creating something specific to that place’s resonances was a happy challenge. Oxbow Park in Georgetown is a strange, otherworldly place…which is exactly why I thought a plot-on-spot-feminist-sci-fi-western video art piece would be appropriate. I love getting a chance to experiment with how I have to edit and present my video work too. I think projecting the brand new film piece between the ‘Hat’ and ‘Boots’ roadside attractions in the park might be the best spot my work has ever been displayed. The park itself is totally Americana in non-Americana sort of presentation. Now I really want to have a concert/dance party there! 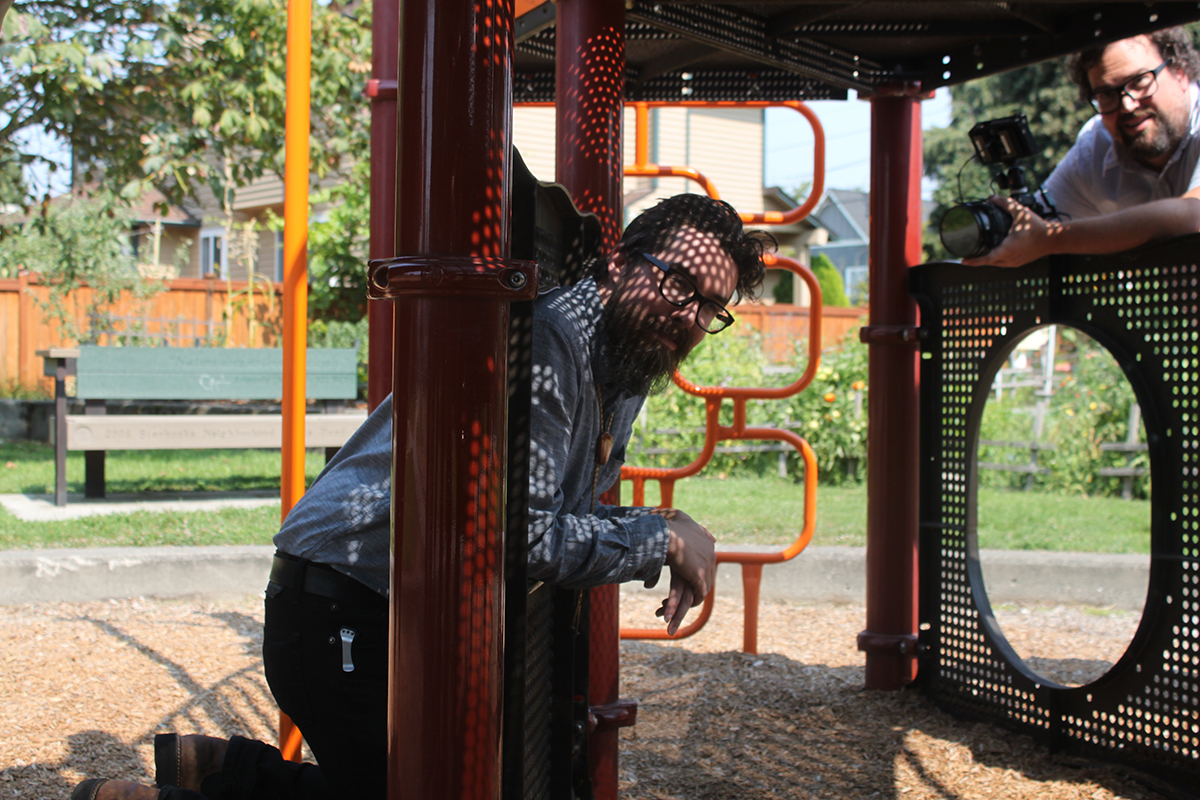 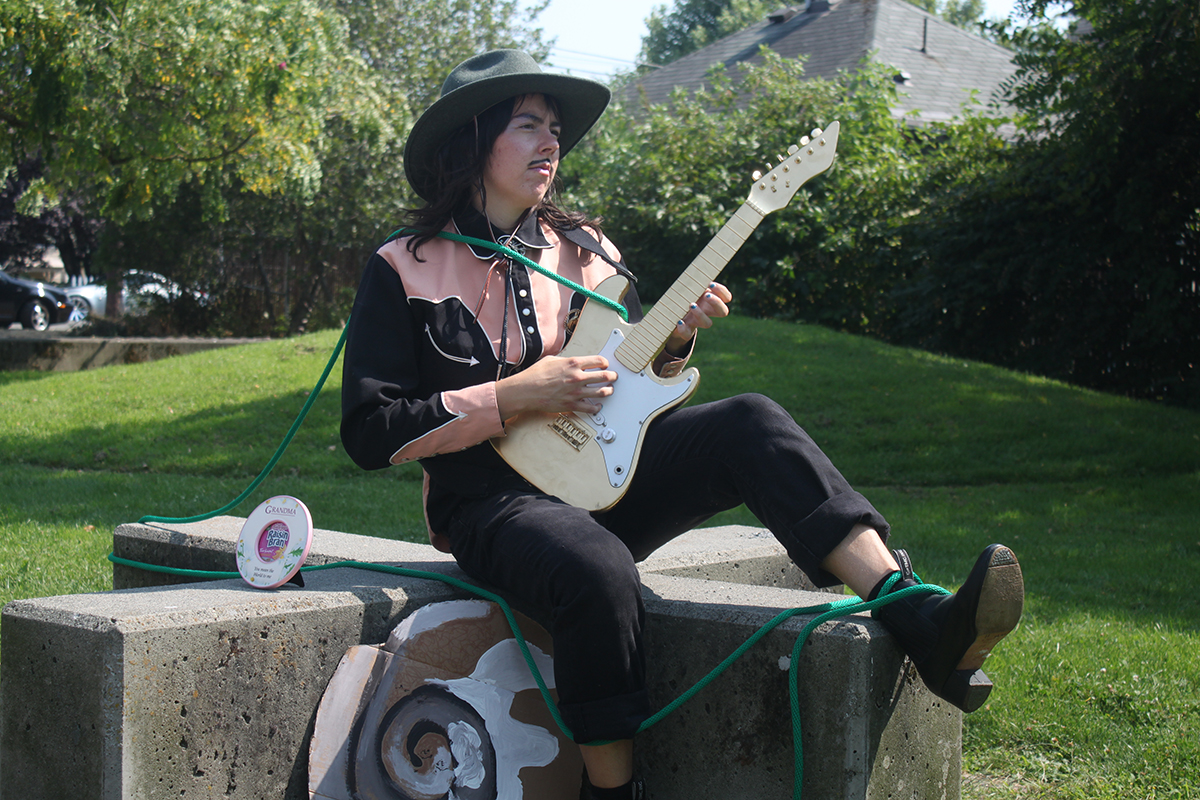 COLEY: Hmmm…my favorite foods right now? For eating, I’ve been in a hardcore breakfast sandwich carving/craving mode. Like, I always want to wedge some greens and vegan proteins between a biscuit or a scone or nice toast (or a protein bar…would that be gross?). But I really need to cut back on my carbs after this wild summer. For looking at and thinking about, I still love round/spiral shaped pastries. And the weirdest & saddest decorated cakes. I usually scream out of excitement whenever I see a cake frosted to look like some other type of food. Humans are so weird. 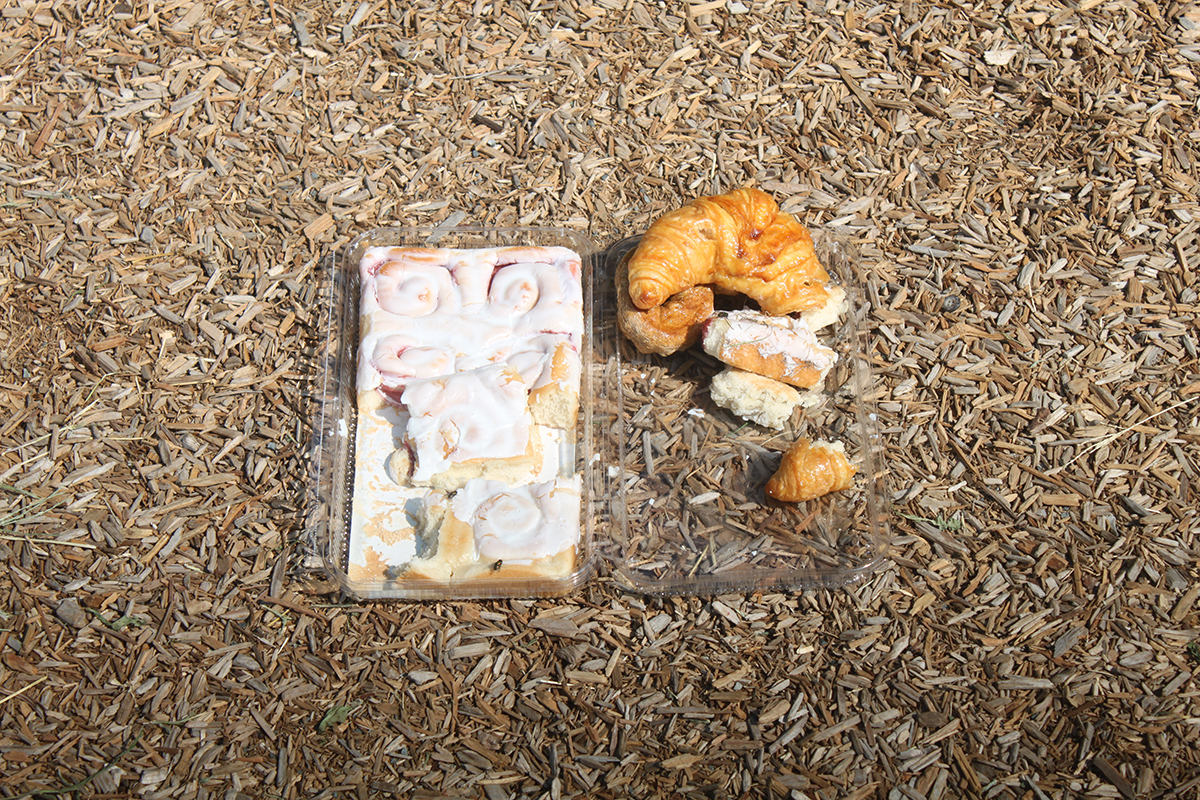 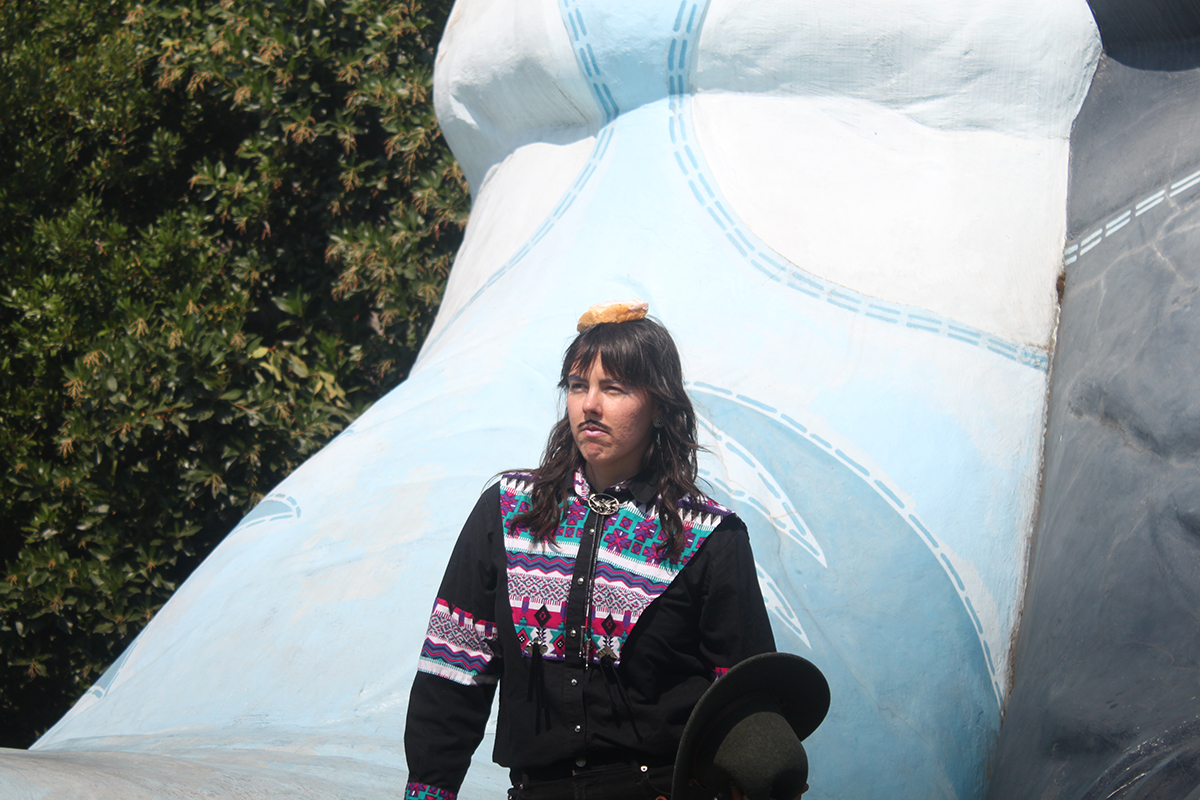 OS: What’s next for Coley?
COLEY: Coley Mixan’s next ventures are: few more solo music concerts in August-November, playing drums with my friends The Carols, a performance festival in Bellingham, two visual art shows in October (one in Chicago, one in Seattle), writing scripts for a new TV show/webseries called ‘Checking Out,’ recording a new album before December and then, hopefully, just squeezing in spacetime to research and learn new things. I also want to connect as many creatives as I can through my work at the public library (I am all about promoting your FREE EDUCATION/RESOURCES). I really want to save up money to buy a computer and camera so I can keep making video work too. And experiment with VR. And write a tap-dancing musical about queer prairies. 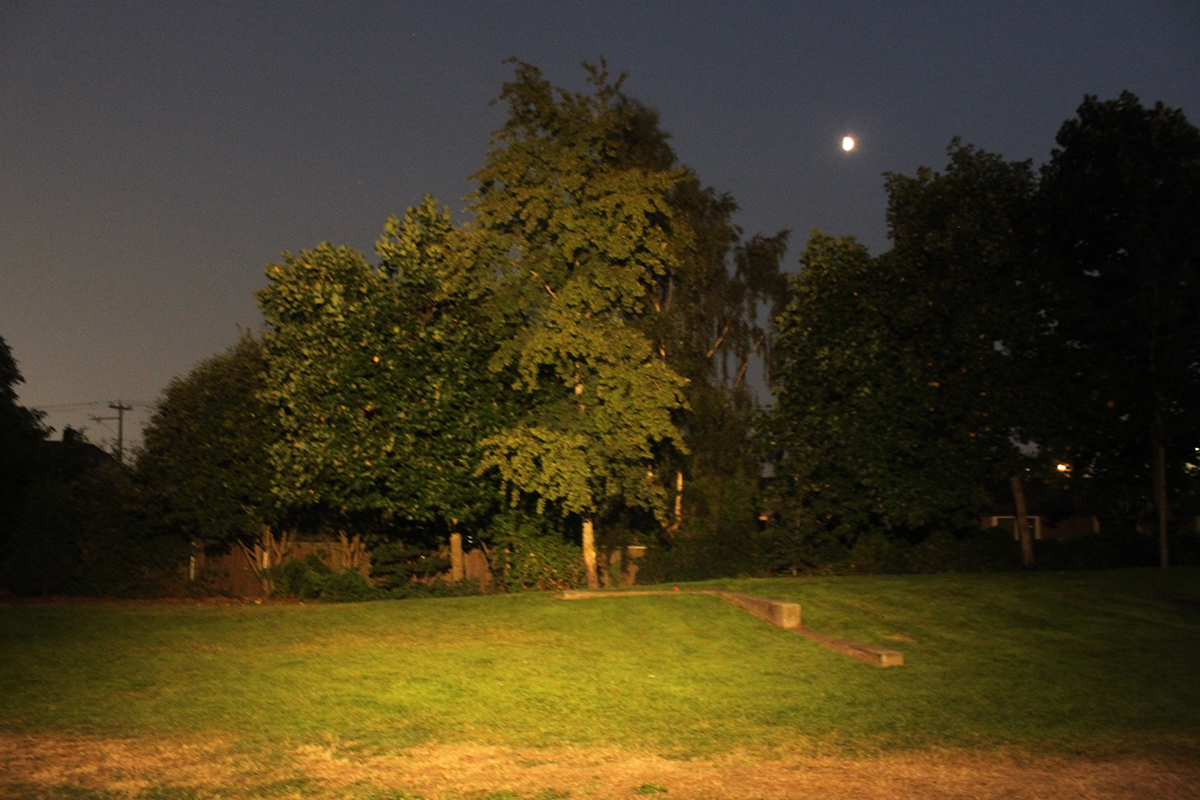 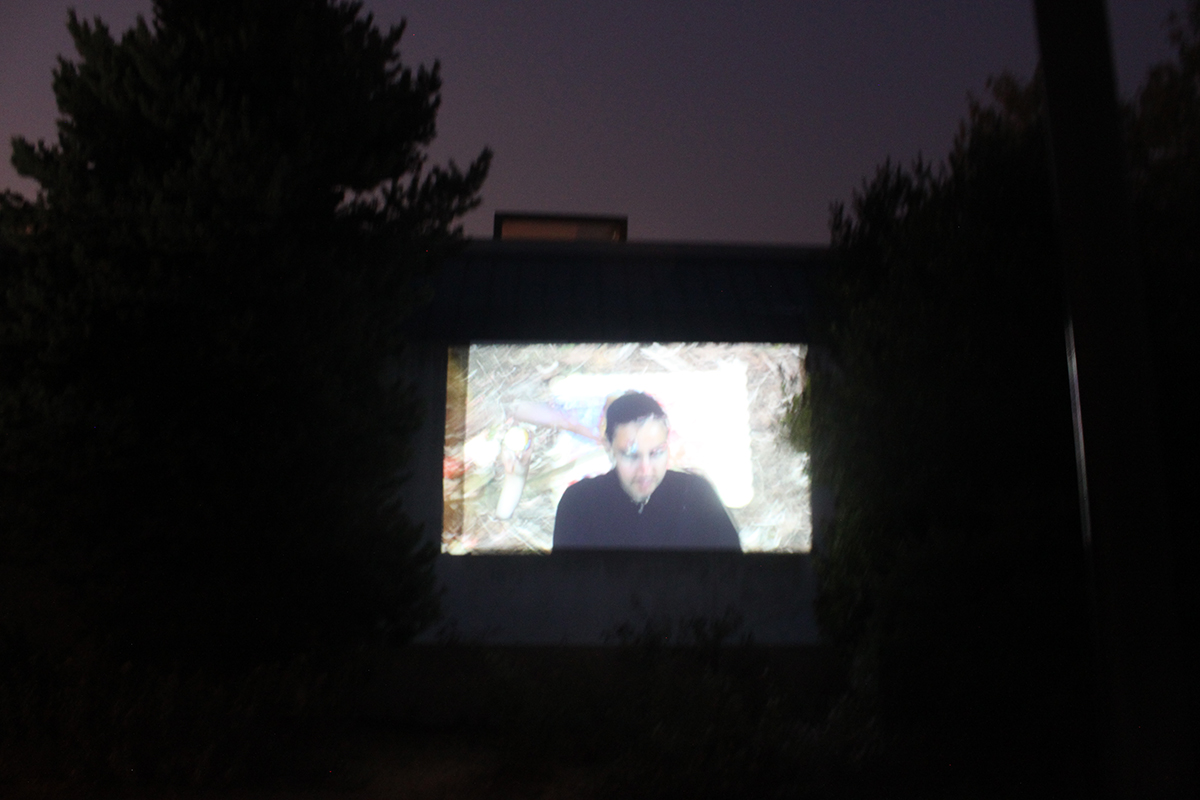